'I had to take the opportunity - Carter 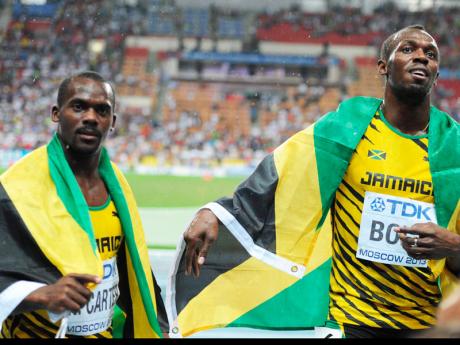 Nesta Carter(left) drapes himself in the Jamaican flag after taking bronze in the final. - Photos by Ricardo Makyn/Staff Photographer

Highly regarded as one of the best lead-off relay runners in the world, Jamaican sprinter Nesta Carter, who has helped Jamaica to two Olympic gold 4x100m gold medals, has never managed to turn his obvious ability into individual dividends.

That's, of course, until he helped himself to a silver medal in the 60m at the 2012 IAAF World Indoor Championships in Istanbul.

Still he was yet to prove himself on the more demanding outdoor circuit, after a seventh-place finish at the last World Championships in 2011 and a semi-final crash at the Osaka 2007 championships.

However, Carter finally managed to put that all behind him yesterday, winning his first medal at an outdoor championships at the senior level with a 100m bronze at the IAAF World Championships in Athletics inside the Luzhniki Stadium.

"I'm happy for the medal and making the podium another time. It's my first international senior outdoor medal," Carter beamed.

"I stride off motivation and I used the last World Championships' seventh-place finish as motivation to come here and do my best and the fact that Yohan Blake couldn't run because of injury, I knew I had to take the opportunity to do what I can do."

Carter, who finished fourth at the National Championships in June, got his chance after Blake's withdrawal from the World Championships because of injury.

In the middle of his celebration though, the 27-year-old did not forget his friends and MVP Track Club teammates, Asafa Powell and Sherone Simpson, who are serving provisional suspensions and awaiting a hearing after testing positive for banned substances.

"They will always be on my mind because I am close to both athletes and I must say that I think I put a smile on both of their faces with this medal," Carter said. "I hope for the best result for them."

Carter will now turn his attention to the 4x100m relay, which starts on the championships' final day, August 18.

"The championship is not over, so I have to stay focused and stay in training for the 4x100m because we have been dominating the relay and we have to keep that going as much as possible," he added.