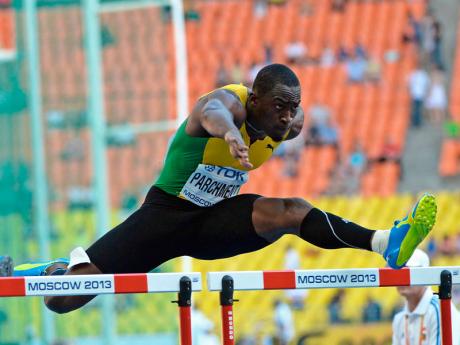 Jamaica's Hansle Parchment clears a hurdle while competing in the heats at the World Athletics Championships at the Luzhniki Stadium in Moscow, Russia, yesterday. - Ricardo Makyn/Staff Photographer

Jamaican 110m hurdler Hansle Parchment insists that he is fit enough to remain competitive at the IAAF World Championships in Athletics after barely qualifying for today's semi-finals.

It was his first race since injuring his left ankle during warm-up at the National Championships in June and it certainly showed as the Olympic bronze medallist struggled for rhythm and his customary middle-phase power, crossing the line in fifth place with a time of 13.43.

The athlete pointed to a combination of race rustiness and 'slight pain' in his injured ankle as the main reasons for his untidy run.

Parchment, who started the season in promising fashion - lowering the national record to 13.05 and racking up a three-race unbeaten streak - shook his head and went on his back as he looked to the sky in disbelief after his run.

"I thought it was the end of my World Champs," Parchment said.

"It was a very disappointing run, but I guess it was due to the race rustiness. But I went out there and I did what I could. My technique was off, but I pulled through," said Parchment, the Fitz Coleman-coached University of the West Indies student-athlete.

"I think it was due to a combination of my technique being off and the injury. It wasn't a smooth race at all. I was all over the place and that's why I had a disappointing run," Parchment continued, before stating that he believes he is fit enough to put together a serious series of races here.

"There is a slight discomfort (in the injured ankle), but I am ok. I am not quite there or where I want to be yet, but I think I am good enough to compete here," he added. "Usually, I would have more drive in the second half of the race, but I didn't feel that drive. I was fighting, but it didn't come."

Parchment, like fellow Jamaican Andrew Riley, who was third in his heat with a time of 13.27, will line up in the semi-final at 10:05 a.m. this morning (Jamaica time).