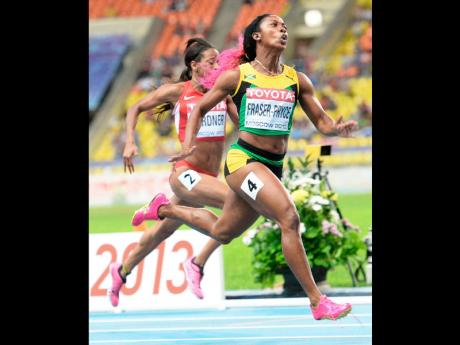 Jamaica's Shelly-Ann Fraser-Pryce motors away from her opponents, as she annhilated the field to win the women's 100 metre final at the World Athletics Championships, at the Luzhniki Stadium, Moscow, yesterday. Fraser-Pryce won in 10.71 seconds. The United States' English Gardner (partly hidden), placed fourth. - Ricardo Makyn/Staff Photographer 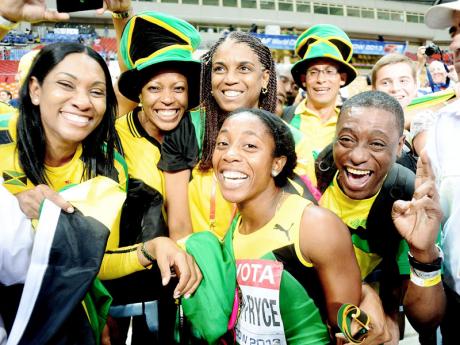 Shelly-Ann Fraser-Pryce (forefront) celebrates with Jamaican fans after winning the women's 100 metres final at the World Championship of Athletics, at the Luzhniki Stadium in Moscow yesterday. - Ricardo Makyn/Staff Photographer
1
2

It was all going wrong for Jamaica on the third day of competition at the IAAF World Championships of Athletics at Moscow's Luzhiniki Stadium until Shelly-Ann Fraser-Pryce - eyes bulging, fists clenched before kneeling on the mondo running track, which was almost bright as her pink-tipped coloured hair - crossed the finish line in the 100m final way ahead of the pack.

The double Olympic champion was Jamaica's lone bright spark on a miserable day. And what a spark she was!

Despite not getting the sub-10.70 mark that she was looking for, Fraser-Pryce undoubtedly established herself as the world's best female sprinter, winning by almost five metres ahead of a high-quality field with a time of 10.71.

The time tied for the eighth-fastest time by a woman in history.

However, the MVP Track Club star, who has a personal best of 10.70, has made no secret of her ambition to take her time into the 10.6-second realm, a mark that she promises will be met before the end of the season.

"I wasn't thinking too much about the time. I was more focused on execution," Fraser-Pryce said.

"It's unfortunate that I didn't get to 10.6, but I got the gold medal. The time will come, definitely before the season ends," Fraser-Pryce said.

Earlier, McPherson, 49.99, ran a mature race in the 400m final that belied her inexperience at this level and finished fourth.

The event was won by Christine Ohuruogu (Great Britain) in a national record 49.41 seconds, ahead of Botswana's Amantle Monstho, who posted the same time, while Russia's Anna Krivoshapka, 49.78, was third.

"I think I took too long to run, but I will be back," McPherson said.

Williams-Mills said she would take some time to think about her future after finishing eight, in 51.49. She has had a long and successful battle against breast cancer.

Riley, 13.51, also missed out on a medal, finishing eighth in the

110m hurdles final. He clipped the eighth hurdle while second, and lost his form and balance while running next to eventual winner, the United States' David Oliver (13.00).

Earlier, during the semi-finals, Olympic bronze medallist Hansle Parchment suffered a cramp to his right calf and crashed into the last hurdle, before being stretchered off the track.

There was also disaster for standout 400m hurdler, Kaliese Spencer, who was disqualified after crossing the line first in her heat for carrying her trail leg around, and not over, the second hurdle. She was adjudged to have violated rule 168.7 (a), which states "Trailed left/right leg below the horizontal plane of the top of hurdle at the instant of clearance."

Nickiesha Wilson, 55.75, who came third in her heat, as well as Ristananna Tracey, 55.94, who qualified as one of the best non-automatic qualifiers, are through to today's semis at 10:05 a.m. (Jamaica time).