Teachers' job fair gets low grade on Day One 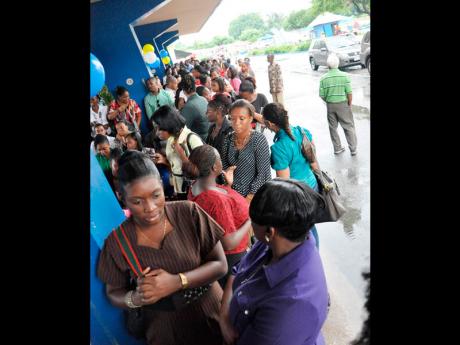 Trained teachers gather outside the Ministry of Education during a job fair in Kingston yesterday. - Jermaine Barnaby/Photographer

Several teachers left the first day of the Ministry of Education's two-day job fair in utter despair yesterday. Hundreds of unemployed teachers and recently trained educators defied torrential rains to make it from as far away as St James and Portland in search of employment; however, many of the 800 teachers in attendance were left frustrated and despondent over the day's activities.

They complained bitterly that the registration process was muddled and they were not being placed in contact with enough potential employers.

"I am a bit skeptical that this will bear anything fruitful. But despite the rain and confusion, I am hoping something positive will happen," said Maurice McCallum, one of the several graduate-trained teachers in attendance.

Many teachers were also observed leaving the fair after the opening ceremony ended and before the résumé writing and assessment workshops started.

They said they felt as though they had wasted their time in attending the event as their expectations were not met.

A teacher who spoke on condition of anonymity dismissed the rain as an excuse for the poor support from potential employers.

The history teacher, who said he had been out of a job since last year after he left the classroom to further his studies, said that the event was poorly organised and he did not believe they could provide enough opportunities for those in attendance.

The ministry had indicated that several potential employers from both the private and public sectors would have been on hand to interview the job seekers. But the ministry said the inclement weather prevented several of these entities from turning up.

Speaking at the fair, Education Minister Ronald Thwaites told the unemployed teachers that they should change their mindsets and reject the notion of anyone owing them a job.

He added: "The day is gone, teachers, when someone is going to present you with a post and tell you, 'OK, fill this because of your qualifications and after a year we are going to give you permanent status'. That's not going to continue."