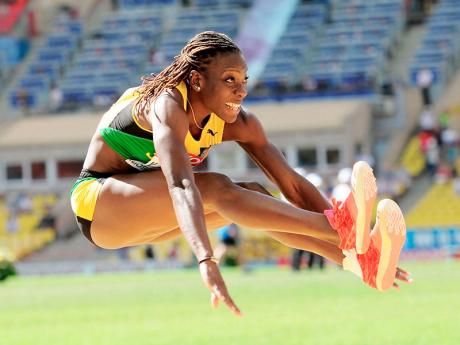 Kimberly Williams really got her international career going as a wide-eyed youngster at the 2009 IAAF World Championships in Athletics in Berlin; happy simply to be jumping with the 'big girls'.

It wasn't until the 2012 IAAF World Indoor Championships in Istanbul - where she made the final - that she realised that she was a 'big girl' herself.

"Things changed for me after World Indoors when I jumped with the girls really for the first time, my confidence skyrocketed, I wouldn't say it went through the roof, but it went sky high and I got better knowing I could compete," said Williams, who finished in fifth place in that World Indoors final.

Since that cold evening in Turkey, Williams has taken her development to new heights, quickly establishing herself as Jamaica's new triple jump standard, having taken over from the still unmatched Trecia Smith, who leapt 15.11m to win gold at the 2005 World Championships in Helsinki.

Williams now joins her good friend and motivator, Smith, as the only Jamaican women to make the triple jump final at the World Championships.

The former Vere Technical and Florida State University student made light work of qualifying, jumping 14.36 metres on her second attempt to extend her championship to the final, which is set for 10:40 a.m. (Jamaica time) tomorrow.

Williams also competed at the 2011 Worlds, before making the final and improving her personal best to 14.53m at the Olympic Games in London last year. She followed that up with a win at the National Championships in Kingston in June and showed her ability once again, with a comfortable qualification to the final here at the 2013 IAAF World Championships in Athletics, inside Moscow's Luzhniki Stadium.

The 24-year-old is now looking forward to showing that she is ready to challenge the world's best for a medal.

"At the start of the year you set out your goals and stuff and right now I am accomplishing what I had put down, so if and when I get on the podium, it would mean a lot to me," Williams told The Gleaner. "It's everyone's dream to finish on the podium at this level. I don't want to come here and just compete, I want to challenge for a medal, do all my best, I want to go out and put out my best effort.

"I don't want to leave here saying 'could have, should have'," Williams continued. "This is my first World Championships final and I just need to continue to show improvement."

Williams was, however, less than pleased about her technical approach yesterday and is hoping to make some corrections ahead of tomorrow's medal attempt.

"My problem right now is not running through the board and these girls have more power than I do, I have more speed, so I need to use that and run through the board, let the phases come and be patient. That's what it's going to take for me to really do well in the final," Williams said.

"It's not that I am afraid of fouling, it's just sometimes when I am two strides out, I feel like I should be taking off when I have two more strides left so, I'm not being patient, I'm rushing the jump and I will have to be more patient on Thursday (tomorrow)," she continued.