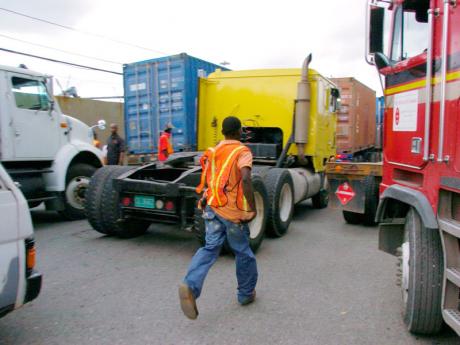 An employee of the Kingston Wharves runs towards trailers blocking a section of Second Street at Port Bustamante. Leonard Green, president of the All-Island Truckers' Association, believes the main reason truckers in particular have turned their attention to Canada is because of better remuneration and conditions of employment. - FILE

As Jamaica continues to haemorrhage manpower to the skilled-worker programme in Canada, there are lingering concerns that a number of local sectors could crumble unless something is done fast to staunch the flow.

Hard hit over the years by the recruitment drive, the Port Authority of Jamaica is one such entity that has had to ramp up measures to keep its maintenance technicians, in particular, on the job.

But even so, it continues to be a constant battle between themselves and aggressive Canadian recruiters.

"We are just keeping our head above the waters," Captain Mike Belcher, managing director at the Kingston Container Terminal (KCT), told The Gleaner yesterday.

President of the All-Island Truckers' Association, Leonard Green, is also sounding the warning that there is trouble on the horizon for Jamaica because of a shortage of truckers who have left the country for greener pastures under the programme.

"From what I hear, the demand far outstretches the supply and they are actually creaming off our better drivers. In the event that we should have any major activity coming up we could see the effects of it," Green said.

"For example, if the construction of the north-south link of Highway (2000) and the expansion of the Kingston Wharves happen simultaneously, then definitely we will have a shortage," Green warned.

Since 2009, some 127 skilled workers have quit their jobs at the KCT, which is a subsidiary of the Port Authority of Jamaica. The majority of those who left took up jobs in Canada.

According to Belcher, 87 per cent of them were recruited directly by Canadians, 10 per cent migrated of their own volition and the remainder were employed to local companies.

"If Jamaica runs out of technicians, we are in deep trouble. The thing is, with our training programme and new equipment that we are getting, we will be able to keep our customers, but what it really amounts to is that we are becoming a technological university here for the Canadian market," Belcher said.

Belcher said between 2011 and 2012, the KCT saw a huge decline in business because of the poorly maintained machinery at the terminal. The company, he said, had to employ drastic measures to prevent further fallout.

"We had to employ locally trained contractors who were trained on equipment other than the equipment we had."

Under an aggressive recruitment and training drive, "productivity on the (shipping) vessels has gone up quite substantially in the last 12 months. It has gone from 24 container moves per crane hour to 32, which has had the effect of encouraging the return of business".

He added: "However, unless we keep up the pressure this side, it (Canada skilled-work programme) is going to put us under pressure again."

He said one of the measures the KCT has put in place to keep its workers is a bonding programme where employees sign a contract stating that they will work at least three years before seeking opportunities elsewhere.

But even so, he is still sceptical as to how effective this will be.

"Information coming back to us is that the recruiting people are prepared to pay off the bond for them, so I am not sure how effective that will be," he said.

"You cannot deny people the opportunity for a better life. Bonding programmes are not always ideal; there is a philosophy against bonding, but he we have done it."

He added that before the end of summer, the KCT could be losing more workers, but he was unable to say how many.

"Another batch might go, but we are never quite sure how many. The only indication we have is the letters from the embassies asking for particulars. Not sure how many letters there are now, but the highest we had at any particular one time is 13 enquiry letters," Belcher said.

The president of the truckers' association believes that the main reason why his members have turned their attention to Canada is because of better remuneration and conditions of employment.

"Conditions of employment in Jamaica are very insecure. In some areas of trucking, it is more seasonal. Sometimes, guys who do like aggregates, when the season is off or there are stoppages in work, they are not necessarily compensated based on the arrangements."

He said the indiscipline of some truckers when they go to Canada seemed to be the only thing slowing down the pace of recruitment.

"They are actually profiling the candidates more than they did initially. Some of them have broken the agreements of their contract, so they are relooking at pulling some of the skill sets from Jamaica," Green said.

Efforts to get a comment from Minister of Industry, Investment and Commerce Anthony Hylton proved futile yesterday.