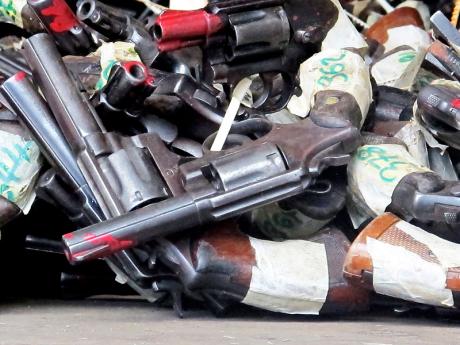 Handguns seized by police piled on the floor of the police armoury in Kingston. Roughly 2,000 seized guns were zip-tied into bundles, transported to a local cement factory and melted down by police and UN officials. - File

The national security minister's push to eliminate the potentially dangerous practice of stockpiling seized guns at police stations has jammed.

The Sunday Gleaner has learnt that an islandwide audit, which is the first phase of moving the guns out of the stations, has stalled, leaving dozens of weapons close to the hands of cops, who have long been accused of planting illegal weapons to make cases against suspects.

In 2012, National Security Minister Peter Bunting announced that efforts would be made to move these guns from the stations as part of efforts to prevent unscrupulous cops from placing them at scenes.

"You have heard over the years of persons being accused of planting weapons. If you don't have a stockpile of weapons on hand, that would reduce that temptation," Bunting told The Gleaner in February 2012.

"It will contribute to good order in the system and centralise the storage of weapons in as few places as possible and under the greatest possible supervision and control," added Bunting at the time.

He further announced that as a first step, an audit of the build-up of illegal weapons in the custody of the police in every parish was to be conducted by the Firearm Licensing Authority (FLA) and the Ministry of National Security's internal audit department.

The two groups were asked to complete the audit as early as possible, to prevent the possible diversion of weapons.

But 18 months after that announcement the audit is still not complete, with indications being that only three parishes were done.

Last week, Dr Kenroy Wedderburn, CEO of the FLA, confirmed that the proposed islandwide audit is not complete.

"The audit of the remaining parishes will resume shortly. As you realise, the FLA, during the past year, was given a new board and a new CEO.

"Focus so far has been mainly on reviewing the internal structures of the FLA to ensure an efficient, effective authority hitting the three new pillars in the new vision - professionalism, integrity and customer satisfaction," said Wedderburn.

He said the illegal weapons taken from the stations already audited will be destroyed.

"We took them. Most of them were in an advanced state of disrepair. We are working with the ministry to have them destroyed," he said.

The FLA CEO was reluctant to say when the audit would resume.

"I don't want to commit to a specific time for the resumption of the audit. Right now, the FLA is focusing on strengthening its internal structures. But the audit might restart in another four to six months," he said.

Meanwhile, human rights activist, Dr Carolyn Gomes, executive director of Jamaicans for Justice (JFJ), lauded the idea and intent of the audit and urged the authorities to resume and complete it with dispatch. "It needs to continue apace," she said.

Bunting's decision to tighten the control of guns at police stations came less than two years after 18 firearms and more than 9,000 rounds of ammunition were taken from the police armoury in the Corporate Area.

Sergeant Russell Robinson, who was assigned to the police armoury, was later sentenced to 280 years in prison for his role in the stealing of firearms and ammunition.

Pellington was sentenced to 10 years in prison while Morris and Blagrove were each given 20-year sentences.