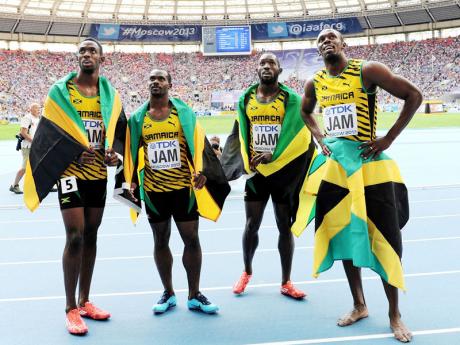 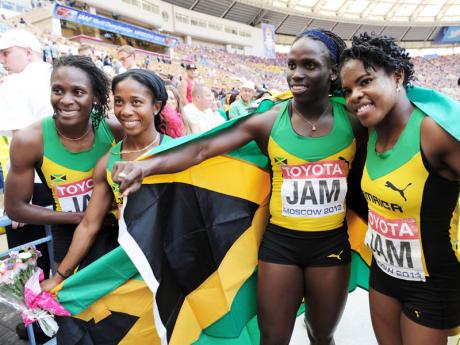 Shelly-Ann Fraser-Pryce became the first Jamaican woman to win three gold medals at a senior championship and Usain Bolt also made it a trio of wins after Jamaica's 4x100m relay teams ended the IAAF World Championships with fireworks and a double gold-medal sweep at the Luzhniki Stadium in Moscow, Russia.

Bolt's third gold medal also ensured that he joins Carl Lewis as the male athlete with the most medals at the World Championships with 10.

Bolt also leads on quality with eight gold and two silver. Lewis has eight gold, a silver and a bronze.

Yesterday's results mean that the Jamaicans will leave Moscow with nine medals: six gold - their second-highest World Championships gold medal tally behind Berlin 2009 (seven) - two silver and a bronze. The country also secured a sweep of the short sprints and sprint relays.

The team of Carrie Russell, Kerron Stewart, Schillonie Calvert and first-time senior championship anchorwoman Fraser-Pryce won by over 10m in a championship and national record of 41.29, erasing the old national mark of 41.41. The United States were second in 42.75 with Great Britain third in 42.87.

Bolt anchored the men's team that included Nesta Carter, Kemar Bailey-Cole and Nickel Ashmeade to a world-leading 37.36 clocking ahead of the United States, 37.66, and Canada, 37.92.

"It's just a normal run. For me, I go to every championship to do my best and dominate and I have to give thanks to the guys. They came out and ran well for the team," Bolt said after the relay run.

"I wasn't worried, I knew my team would be great. After watching the replay, though, we fumbled the baton badly. It wasn't a good exchange, but I wasn't really worried about Justin (Gatlin of the United States) because I knew that even if he got the baton in front of me I would catch him," Bolt said.

Added Carter: "We worked well as a team and the result shows. Even though we could have gone faster, we still have to give God thanks."

This was the fifth straight 4x100m relay win for Jamaica's men at a major championship.

Fraser-Pryce, who admitted to being a little nervous ahead of her anchoring duties, was also happy with her team's gold medal, particularly because of the inexperience among the group.

"Anchoring? I was thinking that I am not a very good anchor and that perhaps I should have started the relay, but it was wonderful and I enjoyed it and, for me, it wasn't a big fuss," Fraser-Pryce said with a laugh.