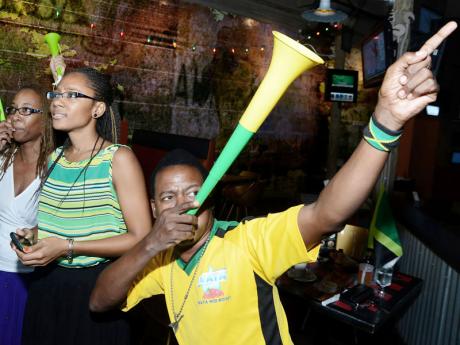 Usain Bolt's Tracks and Records in St Andrew was yesterday filled with the deafening yet pleasant sound of vuvuzelas as numerous Jamaicans came out, brimming with pride, to watch their track heroes win gold medals in the 4x100 men's and women's relay finals.

The two events brought to an end the 14th IAAF World Championships in Athletics in Moscow, Russia, where Jamaica displayed yet another outstanding performance as the nation won nine medals, six of which were gold.

It was all smiles from Gary Matalon, chief executive officer of Kingston Live Entertainment Group, operators of Tracks and Records, as he told The Gleaner how elated he was following the performances.

"Track and field is Jamaica and Jamaica is track and field. We always do so well on the world stage as we are competing with some of the the largest countries in the world and come out on top every time," Matalon said.

"I feel proud! We not only won, but we won convincingly and there is no question about who is number one in the world. The rest of the field looked like they were in a different race, so I am extremely proud about that and the vibe in Tracks and Records is second to none," he added.

Matalon also noted the importance of relays as they are team events that depend more on the cohesion of the team than other track events.

Shani Lawrence screamed in jubilation following the men's 4x100m final as she could hardly contain her excitement.

"I am extremely elated about the performance of the men and women in the 100m relay," Lawrence said. "I went to church before this and prayed for them and, trust me, I am grateful because this prayer was answered."