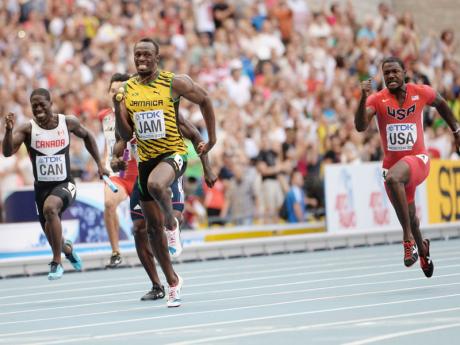 Sprint legend Usain Bolt has expressed shock at comments made by Mike Rodgers, a member of USA's 4x100m team, which finished second behind Jamaica on yesterday's final day of the 14th IAAF World Athletics Championships.

United States led slightly from the second leg with Rodgers, but the exchange with Rakieem Salaam and Justin Gatlin wasn't the best.

It was the error on the exchange that prompted Rodgers to say, "we would have won today.

"I think we would have won, they know it, I think we gave away a gold medal today."

However the biggest name in track and field has objected to Rodgers statements.

"They were like two metres in front of me. I have been in worst positions running from my blocks and won. I wasn't worried any at all about (the) USA beating us, because I was confident in my team and I know if my guys didn't bring it to me leading, it would be close."

Bolt said Gatlin "probably would have to have (been) at least 10 metres ahead of me to win that race".

Jamaica, led off by Nesta Carter to Kemar Bailey-Cole, Nickel Ashmeade and Bolt, stopped the clock in 37.36, well below the country's world record of 36.84. The USA clocked 37.66 for the silver medal.