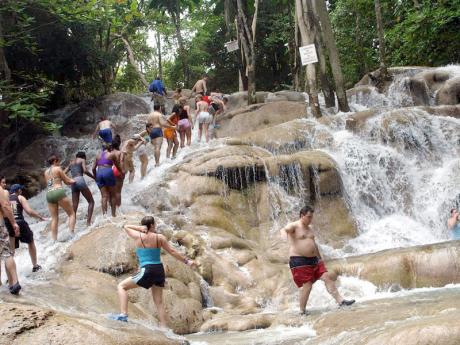 It was years since I had visited the Dunn's River Falls attraction. As a child, it was a regular spot for my family and extended family to go on public holidays or just a regular Saturday picnic at the beach. Those were fun and enjoyable times. So I wanted to take a few of my hard-working employees on an outing and I chose Dunn's River as the spot.

To my dismay, getting into the attraction sent my blood pressure through the roof, left a bad taste in my mouth, an absolute disappointment that this is what it had come to!

The date was August 5, 2013. We arrived at the spot, and as we approached the ticket booths, I noticed a long line of people waiting to buy tickets at the two windows provided. At first, I thought, "There's a lot of people going to the falls today." So we joined the line and waited. And waited and waited.

Then I heard an argument between a patron and the ticket clerk and reference being made to 'showing an ID' and 'resident and non-resident'. Not being sure what it was all about, I waited until it was my turn at the counter.

I announced that I was paying for seven adults and was promptly told I needed to show IDs for all seven persons. When I asked why so, I was told that we needed to show proof that we were residents or we would have to pay US$20 per person as opposed to J$600 for residents.

So I had to remove myself from the line and go back to my party to collect their IDs. Of course, who carries identification cards to the beach except for those who are driving? I would be willing to bet the vast majority don't! So, all I could muster up were three ID cards.

Back to the ticket counter I went and was then told I would have to talk to a supervisor (because of the lack of ID cards). I felt my head starting to hurt and I was trying as hard as I could to be civil to these people.

So the supervisor asks, "Where is your group?" I pointed to them standing nearby. Four well-toned, muscular black women who work in the broiling sun planting cane and picking oranges, day in, day out! And two men of equal calibre who are born and bred Jamaicans. At this point, she buckled and gave the clerk the go-ahead to sell us tickets for $600 each. I begrudgingly paid the money and we went through the gate.

We enjoyed the beach and the falls and even shared some of our home-cooked fried chicken, potato salad and rolls with some non-resident Jamaicans we met on the beach. They thanked us for our hospitality and snapped photos, which were promptly emailed to me with greetings from Delaware!

Never would I have thought that a wonderful natural attraction like Dunn's River would become so political, so degrading to our local people. A visitor to the island met me on the falls and commented on the conversation he heard at the ticket counter. He also was appalled at the treatment meted out to the locals and expressed that it was a real disgrace.

What I would like to ask is: Do the foreigners (or non-residents in this case) get more out of Dunn's River than the residents? Is it not the same sea, sand and river that everyone who visits Dunn's River enjoys? So why the difference in price? Can the Government, which owns/controls Dunn's River, give me a plausible answer? I think not!

Email feedback to columns@gleanerjm.com and dejaggan@hotmail.com.