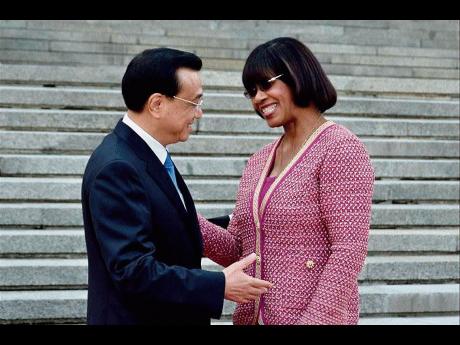 Goat Island, located on the St Catherine coast, could be the site of the much-touted logistics hub.

Robert Pickersgill, Jamaica's minister with responsibility for land and environment, told representatives of China Communications Construction Company Ltd (CCCC), that consideration is now being given for Goat Island One and Two to be the site of the hub.

"The preferred selection by your company as to where the logistics hub should be located is now under very serious consideration," Pickersgill said.

He noted that the project requires some 3,000 acres of land and an appropriate place for the harbour to be located.

"We have had appropriate meetings with the landowner, the Urban Development Corporation, and the National Environment and Planning Agency - the agency that is in charge of environment protection - and we have looked, as well, at a possible alternative," Pickersgill said.

He was speaking during a meeting with CCCC representatives in Beijing, China, yesterday at which Prime Minister Portia Simpson Miller urged the Chinese to invest in Jamaica.

CCCC Vice-President Chen Fenjian told the Jamaican delegation that the hub would be developed on a phased basis.

He said Phase One would involve the construction of a container terminal and industrial park.

"We are master-planning a port manufacturing into the industrial park. We have sent a team of specialists to do the site investigation," Chen said.

He noted that CCCC has reported to the Chinese government on its plans for the investment and said it was great supported.

The Government had earmarked Fort Augusta in St Catherine for the creation of the hub. However, the Chinese investors said based on the plans they have, that area was not big enough.

But aware that the proposal to build the hub at Goat Island might cause a fight with environmentalists, Pickersgill said the Government was "very aware of the need to settle that".

CCCC said it was prepared to honour its environmental and social responsibilities in return for the opportunity to make the investment.

Pickersgill said Port Esquivel was considered as a possible alternative location, but it was not feasible as other industrial operations are under way at that site.

CCCC President Liu Qitao told the Jamaican delegation that as "a responsible international company, we will take the full responsibility for environmental and social liabilities, etc".