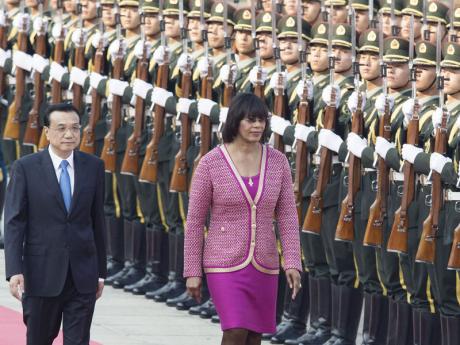 Jamaican Prime Minister Portia Simpson Miller (right), escorted by Chinese Premier Li Keqiang, inspects the honour guards during a welcoming ceremony at the Great Hall of the People in Beijing yesterday. Simpson Miller is on a five-day visit to China to bolster economic and diplomatic ties. - AP

WITH THE Statistical Institute of Jamaica last week revealing that the country's unemployment rate is at 16.3 per cent, Jamaica's foreign minister, A.J. Nicholson, is hailing the inking of an agreement with the Government of China as a major step in reducing joblessness.

"That is the one which is going to assist us in having a few more jobs come on stream. You know that the issue of jobs in Jamaica is really on the front burner at this time, and even though there are others that were signed, that is the one at the moment I would concentrate on," Nicholson told The Gleaner.

The minister signed the agreement with Jiang Zengwei, China's vice-minister of commerce, at the Great Hall of the People, Tiananmen Square, Beijing, China.

The signing of the preferential buyers credit loan agreement between Jamaica and the EX-IM Bank of China followed a spectacular welcome ceremony, where Prime Minister Portia Simpson Miller met with China's Premier Li Keqiang at the same venue.

Simpson Miller, who received a gun salute from the military, had closed-door meetings with China's leaders.

Following the meeting, the documents were signed, paving the way for the flow of funds under the US$350 million Major Infrastructure Development Pro-gramme.

Works minister, Dr Omar Davies, this year announced that the programme, jointly funded by the Chinese and the Jamaican governments, would be introduced as the Jamaica Development Infrastructure Programme comes to an end.

Nicholson and Jiang also inked an a agreement on economic and technical cooperation, which will see China providing Jamaica with a 100 million yuan (US$14.2 million) grant in aid to Jamaica.

The money is to be used for projects to be mutually agreed upon through consultations between both countries.

In the meantime, Jamaica has inked an agreement for the construction of two infant schools, one in Tower Hill, St Andrew, and the other at Morant Estate, St Thomas.

The Chinese have agreed to build the schools and will be responsible for the supply of construction machinery, equipment, materials and the supply of technical persons for the projects. The schools will include classrooms, playing room, rooms for service, auxiliary rooms, outdoor corridors and outdoor playground.

Jamaica is responsible for providing the land for the facilities, as well as clearing the sites and providing road, water and electricity. All duties and taxes on the import of machinery, equipment and materials for the project will be waived.