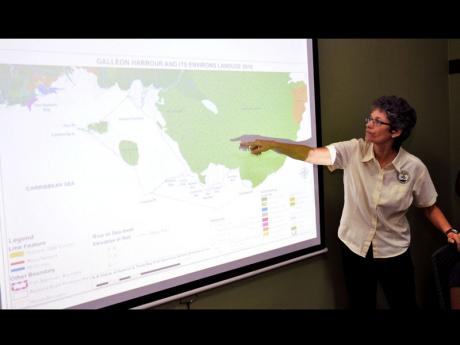 One civil-society group yesterday declared it feels "less optimistic" about the prospects of the historic social partnership agreement that is being touted as a critical plank to the country's growth and development.

The declaration by the Jamaica Environment Trust (JET) follows the Government's announcement from China that it is eyeing the Goat Islands, located in the Portland Bight Protected Area (PBPA), for use by Chinese investors to construct a multibillion-dollar logistics hub.

A strident Diana McCaulay, chief executive officer of JET, complained yesterday that local scientific experts and civil-society groups have no details about the site-selection process and charged that there has been a lack of transparency leading up to the announcement by Environment Minister Robert Pickersgill on Wednesday.

According to McCaulay, there is no evidence the Government has conducted the relevant due diligence to try and identify a suitable site for the hub.

She charged that it was the Chinese investors who were insisting on constructing the hub in the PBPA.

McCaulay claimed there has been no consultation with the various stakeholder groups and said this runs counter to the spirit of the social-partnership agreement which commits the participants to principles of transparency and honesty.

She made it clear that she intends to engage other civil-society partners in discussions on the issue to determine "whether this strikes at the heart of the agreement we have signed".

"JET, JCSC (Jamaica Civil Society Coalition), and other civil-society groups are members of the Partnership for Jamaica. We feel that if we go about development in this way, it is not honouring the commitment made by that important signing," she insisted.

The construction of the hub is being done to help Jamaica take advantage of the expanded Panama Canal when it opens in 2015. The Government has insisted that the project will provide thousands of much-needed jobs.

But McCaulay said persons who argue in favour of the hub at the expense of the country's natural resources either don't understand or are undervaluing their importance.

"It cannot be rational government policy to protect all these areas, to acknowledge their importance, and then a few years later, turn around and annihilate them," she asserted.

According to the Caribbean Coastal Area Management Foundation (C-CAM), Goat Island One and Two (also known as Great Goat Island and Little Goat Island) located off the coast of the Hellshire Hills, are approximately 1,876 square kilometres, with some 50,000 residents who depend largely on fishing. Both islands form part of the PBPA, which is the second-largest protected area in the country.

Pickersgill's announcement appeared to have surprised Ingrid Parchment, the executive director of C-CAM, which is working on a management plan for the PBPA.

She said the minister wrote in a 2012 foreword for the plan that he was committed to working with C-CAM to manage the natural and heritage sites in the area.

"So, we are very concerned when we see that there is this plan for total devastation to Portland Bight," she revealed.