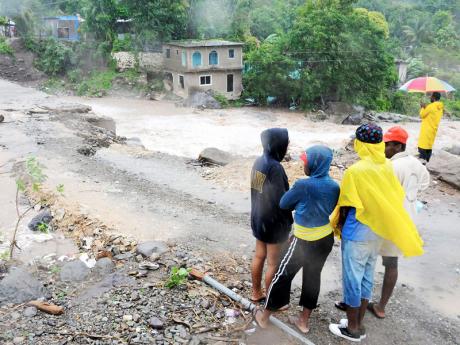 Residents of Kintyre, St Andrew, watch the rising water levels of the Hope River, hours before Hurricane Sandy made landfall in October 2012.-File

The Caribbean insurer which sells storm and earthquake coverage to governments is co-piloting a weather product designed for individuals.

The product is essentially an income buffer designed to assist persons resume normal activity after a disaster.

JIIC, working with the St Thomas Co-operative Credit Union, has identified 12 communities as potential markets for LPP coverage under which they will be reimbursed for damage from severe wind and rain events. LPP does not cover property damage, says Jordon Tait, acting customer experience and innovation manager at JIIC.

The premiums under the test run are around J$5,000 per year.

Starting this weekend, JIIC will go into the 12 St Thomas communities to pitch the policy to individuals.

Asked about the sharing of the risk for coverage once LPP hits the market, JIIC General Manager Grace Burnett said she would have to consult with reinsurance partner Munich Re before comment.

Like the earthquake and hurricane policies sold by CCRIF to 16 regional governments, including Jamaica, the LPP is based on parametric modelling, which means payouts will be triggered not by severity of damage, but on preset conditions relating to the intensity of the weather event.

Payout will only flow if the pre-set triggers are activated. And policyholders will be advised via text message when a payout is made to their bank accounts.

The policy will not be rolled out fully to the market until year end, Tait told the Financial Gleaner.

"We are currently in the development stage of the product. The feasibility of launching the product will be determined after we have completed testing," he said Wednesday.

Burnett said the distribution of the LPP could begin as early as October, but notes that the final timetable will be determined by the results of the test phase.

The development of the LPP falls under the Climate Risk Adaptation and Insurance in the Caribbean Project led by the Munich Climate Insurance Initiative (MCII), which is hosted at the United Nations University Institute for Environment and Human Security.

The project is implemented by MCII together with its partners CCRIF, and the German companies MicroEnsure and Munich Re.

Funding is provided by the German Federal Ministry for the Environment, Nature Conservation and Nuclear Safety under the International Climate Initiative.

The policy has already been launched in St Lucia. The insurance partner in that market is EC Global Insurance Company Limited.

Perils covered by LPP are high wind speed and excessive rainfall. There will be no claims assessment procedure. Instead, the policy pays out when threshold values for wind and rainfall are exceeded.

The weather insurance policy is designed specifically to help vulnerable, low-income individuals recover from the damage caused by strong winds and/or heavy rainfall during hurricanes and tropical storms, CCRIF said in its May-quarter report.

However, LPP is said to be targeted at all individuals irrespective of income level or livelihood. It's meant to hasten the pace of recovery from natural disaster at the microlevel.

"One does not have to be a farmer, just be in the affected area," Tait said.

"There are certain weather-related triggers dependent on location, such as wind speed above a certain level. The maximum benefit currently is J$50,000, and the premium is J$5,000 for the year," he said.

With this payout, policyholders will be compensated for any disruption of income-earning activities without even applying for payment, as payout is automatic once the trigger is registered.

According to Tait, informal traders, such as taxi operators, can also use the policy proceeds as income during disruptions.

Monitoring of weather events will be done by three third parties: DHI, whose satellites are used to measure rainfall, CCRIF and NASA. Rain activity is monitored by DHI - formerly known as Danish Hydraulic Institute - and wind by CCRIF.

The policy has been designed for all Caribbean nations prone to extreme weather events, which make it a challenge for people to cope with the damaging effects of weather-related risks and the threats such risks pose to their lives and livelihoods.

So far Jamaica, Grenada and St Lucia have shown interest, according to information disclosed by CCRIF.

JIIC is the underwater for Jamaica, while Trans-Nemwil Insurance Limited is the partner in Grenada. The policy went on the market in St Lucia in May.