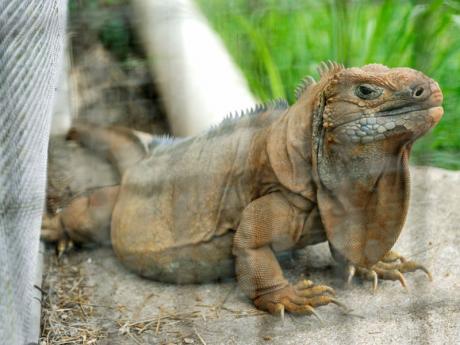 Iguanas living on the Goat Islands will be at risk if the Chinese mega investment port presses ahead, say environmentalists. - File 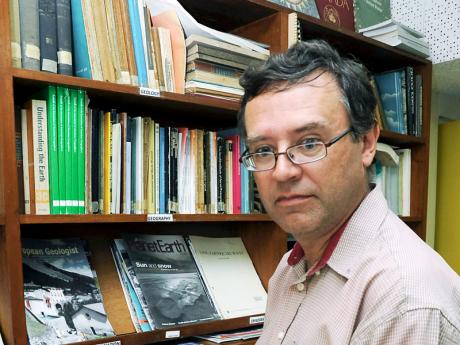 Simon Mitchell, a geologist at the Mona campus of the University of the West Indies.
1
2

It might be because they are called Goat Islands, but that doesn't mean that Government can do as it 'maaay'. We are being asked to trust a government that has a Corruption Perception Index score of 3.8 on a scale of 1-10 - a party that told the country that there was no hanky-panky in a matter that only involved a few million chicken-feed dollars, yet there is still no full disclosure.

With an Opposition in shambles, having barely recovered from the successive electoral defeats and now being embroiled in a leadership race, the Jamaica Labour Party is only interested in the green on its shirts, none on the island.

My first consideration is why it was even contemplated in the first place.

The Goat Islands are, in many ways, a natural reserve, and are protected under the Natural Resources Conservation Authority Act. It might, from my non-legal titbit of knowledge, be unlawful to even build there. However, I am willing to bet that some legal luminary will advise Government that he can give a different interpretation of the law or Parliament can subvert it by rushing through the legislation.

Dozens of indigenous birds nest there, and it might be the only place on earth that one particular species of bird mates and reproduces. It might be a hard sell, but our largest lizard and crocodiles live and nest there. True, we are a scoliodentosaurophobic people, but lizards have a place in our ecosystem.

The Jamaican iguana has come back from the verge of extinction, sort of like how the big man bounced back from political oblivion. This creature, despite having relatives on other islands and in other countries in the Americas, doesn't exist anywhere else in the world. The Goat Islands are the last place a viable population resides. Thus, if there is even increased human traffic over the next few years, the only big lizard in Jamaica would be Flourgon and Red Dragon's cousin, and we know how visible he is today.

One might think that having a native species remain alive and part of the ecosystem is simple, middle-class elitism or the idle rich's concern. But a man of God who serves political parties, if he still remembers that he is first a clergyman and second a political apologist, should understand that every creature is placed in this Garden of Eden for a purpose.

Lizards and crocodiles play important roles within the environment, and they keep other organisms in check. Crocodiles are also domiciled around the island. Contrary to being simply dangerous man-eaters as typified, they generally do not attack unless provoked or nesting. Ask the professor in the Life Sciences Department at the University of the West Indies (UWI) and he will tell you more than 'tails' and fables about the lizards on the islands.

We have heard, with some justification, that poverty is the greatest enemy to the environment. When spin doctors use such catchphrases, it is bad enough, but when my much-respected academics, masquerading as politicians, repeat it with vigour, it takes on greater significance.

Perhaps it is overlooked that it is the poverty of nations that allows for the exploitation of their natural resources to such an extent that it destroys the national biosphere. The example of the Amazon is a very good case. Considered the lungs of the world, the greatest rainforest in the world, which controls temperature and rainfall across the entire globe, it is rapidly being denuded by legal loggers, miners and other foreign investors who have been given bend-over-backwards deals by corrupt or incompetent governments.

Indeed, the investment and exploitation of oil in Niger and Nigeria, and gold, diamonds and other minerals in Africa in general, have made little dent on poverty, life expectancy and overall development. However, a few elites, aligned to ruling classes and governments, have got rich.

Nevertheless, the main question is, once again, why the islands have been chosen by the investors. In a conversation with professor of geography and geology, Simon Mitchell, at UWI, the unsuitability of the locale was raised. Now, I know very little about rocks, seabed, and channels. However, I am willing to bet that the minister with responsibility for the environment, being a lawyer, knows just more than zilch about his portfolio, and on the subject of maritime trade can probably tell us about cruise ships, seamen and beaches, but he has no expertise on the Goat Islands.

Given the excellent record he has as the minister who implemented the toll road development, and the restrictive terms with which we bent over to kiss the French, there is basis for us to 'tikya'.

Similarly, the chairman of the Urban Development Corporation is a veteran attorney who has an impeccable record as a litigant and knows a good lie when he recognises such mendacity. Somebody is lying to the Jamaican people as to the real intention behind the targeting of the island.

Mitchell suggests that there is much too much shallow water surrounding the Goat Islands and the deep waters are so narrow, unless the pilots and captains are super skilled, they could easily run aground or brush off the coral on the banks and reefs. To make the waters passable, it might take dredging of the sea floor to depths as low as three storeys. Imagine all that sand and other gooey stuff, as well as the millions of crabs, lobsters, conch and other marine life being displaced.

Forking up the sea floor will not only darken the sea and kill off the aquatic creatures, it will make folks who fish suddenly lose a livelihood. The project could remove parrot fish. Thus the creature upon whose faeces we depend to distribute the sand it creates by grinding coral while the fisherfolk try to catch them would disappear. So would the beaches. We might not like lizards, but I am sure that Jamaicans love fish.

Goat Islands are a no-go, and according to Mitchell, it is also much more prone to earthquakes, which might make the controversy now seem like a mild tremor. Of course, a logistics hub, located on an island out at sea, in an earthquake belt, seems like somebody's brilliant idea. Indeed, it might be as good an idea as a stadium built by - guess who? - the Chinese, in Trelawny, the sprinting epicentre, but one which cannot accommodate a well-needed 400-metre track.

Of course, the Chinese have done their own technical analysis and are ready to roll out at least US$1.5 billion. But China has a horrible environmental record at home. Why should we believe that they will have a more favourable approach to our little green rock?

For the professors, if the policymakers are really interested in making a hub, as we are led to believe, and not that we are trying to give the island to the foreigners for some other purpose, they can go to 'Rogerland'. Believe it or not, going west is, according to the geological expert, a better idea. The Georges Plain has large expanses of flat land, are closer to the route from the Panama Canal, and will do less damage to thebiodiversity. Most important, it would have an impact on the employment situation in the west.

Nevertheless, in as much as we see the logistics hub as being capable of generating mega-employment, let us remember the first ore we allowed foreigners to mine. Poor government vigilance made us give up bauxite with little more than a kiss and we got much less than we could have. For all the negative environmental impact, bauxite gave us limited employment and few forward and backward links.

If we destroy the islands for the hub, will we truly get what we expect, or will we simply have to take, keep and put up with a lot of ships?