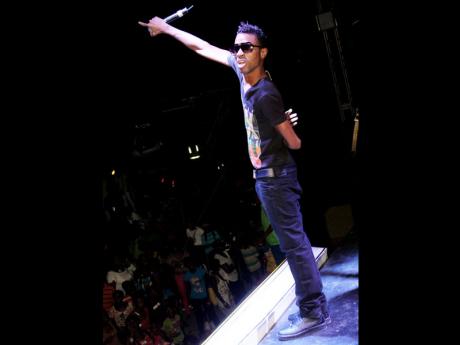 While the content of his songs and his image have shown growth, dancehall artiste QQ says many persons still see him as a child.

In recent times, the 19-year-old artiste has released popular songs like One Drop and Ghetto Gal, shedding the childlike nature of his songs for more grown-up content. Despite his best efforts, QQ, whose real name is, Kareem Dawkins, said he is sometimes looked at as the 10-year-old child who broke onto the music scene with Poverty almost a decade ago.

He explained that the transition from childhood to adulthood was difficult. He said key changes had to happen and "I didn't get accustomed to the new voice, so I would squeak." He said there was also the facial changes and facial hair that he had to get used to.

Now that there has been some physical changes, he said he looks "different to the point where it's hard to tell it's QQ."

However, "The voice has matured to a level where I wanted it to reach. The voice break and I get the little deep voice that I've always wanted," he said.

With more visibility, he said he believes more people will be able to appreciate and get used to his new look.

"I think since One Drop and Ghetto Gal videos, people are relating to me as the older person. I have more videos coming now so they will get more accustomed to the new me," he said.

He continued, "Because I have matured I get the opportunity to take advantage of that. After a while they will see me as a man. The lyrics are more mature."

Meanwhile, QQ says he is happy to be making a full comeback to the industry after taking a break.

"I took a break to focus on school and they (public) gave me the opportunity to do what I did before. They never had to let me back in. They gave me an opportunity to show my talent. I love my fans and I appreciate them a lot," the former Calabar High School student said.

QQ also has other fairly new songs like Kotch Pon Di Edge, Bunna Man, Feel Di Vibes (featuring Blak Ryno) and Bawl Out, which he said "is a song that is going to make everybody say I'm grown."