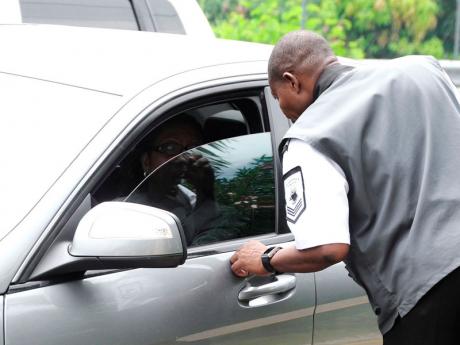 A security officer instructs a member of the legal team to use an alternative gate in order to get on to the 107 Old Hope Road premises where the Veronica Campbell-Brown hearing was being held yesterday. - Ricardo Makyn/Staff Photographer

The hearing into the doping case surrounding celebrated Jamaican sprinter Veronica Campbell-Brown will enter its third day after another interesting sitting yesterday.

After Monday's media run-in at the original venue on Balmoral Avenue, yesterday's closed-door inquiry was moved to the headquarters of security firm Guardsman Limited, for even greater privacy.

However, according to our sources, at least two witnesses appeared yesterday, with Jamaican sports medicine and anti-doping expert Dr Paul Wright and a polygraph expert said to have taken the stand.

There were other issues with missing documentation, as was the case on the first day. It is also understood that key witnesses, including the chaperone and site coordinator involved in the matter, are yet to be located and contacted by the Jamaica Athletics Administrative Association (JAAA), which is overseeing the hearing, as instructed by global authority, the IAAF.

The JAAA Disciplinary Committee - led by Chairman Lensley Wolfe, Dr Aggrey Irons, and Lincoln Eatmon, who has stepped in for Major General John Simmonds, who was unavailable for this hearing - once again presided over the hearing.

Campbell-Brown, one of the most popular figures in international track and field, tested positive for a banned diuretic at the May 4 Jamaica International Invitational inside the National Stadium.

She was subsequently given a provisional ban by the JAAA and was forced to miss last month's IAAF World Championships in Athletics in Moscow, where she would have competed as the defending 200m champion, after her win two years ago at the Daegu, South Korea, instalment.

Campbell-Brown, who has won 16 medals for Jamaica at the Olympics and World Championships, in a release sent to the media by her agent Claude Bryan, shortly after news broke of her positive test, swore her innocence, underlined her integrity and vowed to fight to clear her name.