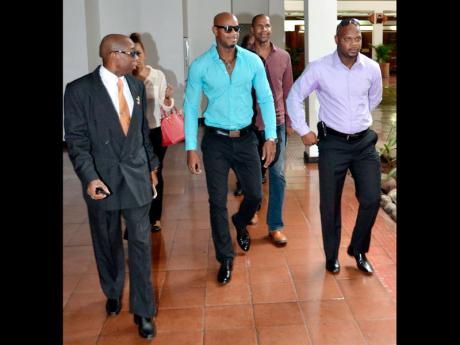 Former 100-metre world record holder and Olympian Asafa Powell (centre) is flanked by attorney-at-law Kwame Gordon (left) and brother, Donovan Powell (right), on his arrival at the Jamaica Conference Centre in downtown Kingston yesterday for a mentioning of his disciplinary hearing, following a return of an adverse analytical finding in June. Also pictured in the background are president, MVP track club, Bruce James (right), and a member of Powell's support staff, Sarah Playfair. - JIS photo 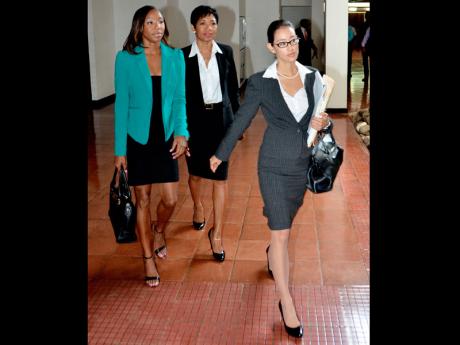 The athletes, with the exception of Randall, who currently resides overseas, faced members of the Jamaica Anti-Doping Disciplinary Panel yesterday at the Jamaica Conference Centre in downtown Kingston where the pretrial dates were set.

The date for Smikle, Randall and Robinson, who are all represented by a team of attorneys led by Dr Lloyd Barnett, William Panton and Sabrina Cross, has been set for Friday, September 20, at 10 a.m. at the Jamaica Conference Centre.

Randall will sit before a four-member panel, which includes Pantry, Taylor, Dr McDonald and Cuthbert-Flynn.

Powell and Simpson, who are being represented by attorneys Kwame Gordon and Danielle Chai, a pretrial hearing has been set for Friday, September 27 at 10 a.m. at the Jamaica Conference Centre.

A three-member panel led by attorney-at-law and vice-chairman of the Anti-Doping Disciplinary Panel Lennox Gayle; physician Dr Jephthah Ford and Prendergast will preside over the hearings for both Simpson and Powell.

Both Powell and Simpson tested positive for the stimulant oxilofrine at the national trials in June. Powell has blamed his positive test on a range of new nutritional supplements prescribed to him by a physiotherapist.

Pantry, who led the proceedings, said the matters concerning all five athletes will not be heard during the pretrial hearings.

"The pretrial is really where certain orders will be made for documentation and other things and then a (disciplinary) hearing date will be agreed on (for each athlete) on that day," he stated.

The Jamaica Anti-Doping Commission (JADCO) was represented by chairman of the body, Dr Herbert Elliot, and attorney-at-law Lackston Robinson.

Meanwhile, JADCO has informed that back-up tests for all five athletes have confirmed the prohibited substances which were found in the 'A'-sample analyses in June.

The local anti-doping body said the athletes' 'B' samples were tested at a Montreal-based lab accredited by the World Anti-Doping Agency. JADCO further informed that all five athletes have been notified and have acknowledged receipt of their notification letters of an adverse analytical finding for a 'B' sample.

The commission said the findings were referred to the independent Jamaica Anti-Doping Disciplinary Panel for their consideration and the establishment of the hearing panels.

The commission also said it continues its rigorous anti-doping programme and conducted 16 out-of-competition tests in July 2013.