Daggers drawn, but Roger is OK 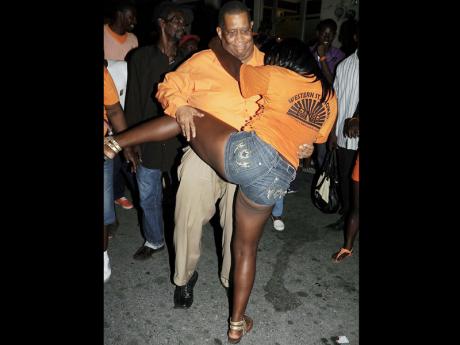 During the campaign for the 2011 general election, Roger Clarke showed that he was up to any challenge on the dance floor during a PNP tour of Yallahs, St Thomas. - File 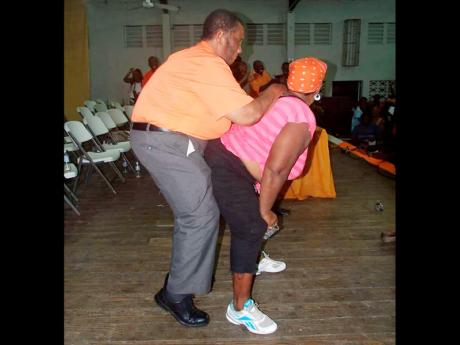 I don't know about you, but unless it was Jake that he was doing the daggering dance with, I have absolutely no problem with the fat man dancing.

Moreover, with all the back-stabbing going on in the Jamaica Labour Party (JLP), the half-truths and limited information given regarding the Goat Islands, at worst, it is amusing that the minister under whose portly-folio goats fall, should be backing up his chat with action.

That a 300-pound-plus septuagenarian is able to look cockeyed at his party supporters and detractors alike, and stand up, much less to wine, when most men his age can only whine, is a coup of sorts.

It is amazing that in a two-week period when the details regarding the logistics hub are as elusive as a minister who blocks out even the government news agency, a hen fight between two stalwart Labourites, and the labour minister telling the unemployed to go seek work in foreign lands, the antics of the People's National Party's (PNP) heavyweight make top news.

Bigger news than Roger Clarke's waistline is the way in which the JLP is demonstrating that it is capable of managing dissonance among its members, given that a party with as few members as it has, is much smaller than a population of 2.8 million. As Labourites fought and people focused on crap, it is clear why the two weeks were quite a fortnight.

The reaction to the minister having a ball or two at the party event says much about the divisiveness in Jamaican society than something substantive. Reactions to the leviathan bubbler have ranged from amusement to nonchalance, to total condemnation.

One post said it was unbecoming of a minister. But what determines appropriateness of conduct? What makes Roger's behaviour repugnant? Is it that he just can't do anything right for some journalists and detractors? If the poor man walks on water, it is because he can't swim? And if he swims, is it because he is a whale or another aquatic creature from the southern waters?

Jamaica is a pluralistic society, where there are at least three different culture segments which were originally simply colour divisions. The higher one climbed the social ladder, the less pigment and remnants of African culture there would be. Tastes, food, dress, education, religion, language and almost everything, except politics, were arranged in neat strata.

Political economist George Beckford, and sociologist/anthropologist M.G. Smith, a founding father of the PNP, spoke of the legacy of the plantation system and the trifurcated society that remains up to today.

Jamaica is still a plantation in which the entire cultural patterns of the lower classes are stigmatised and made a mockery of. Our legal code criminalises patterns of behaviour, which are unique to the lower strata. Thus, for example, young men gathering on the street corner holding a 'medz', and not those mining for palm gold, are seen as idlers, when the truth is, their two-bedroom houses are so small that they only stay there when it is bedtime and they have to pack themselves like tin mackerel.

I bet you that my editor has no issue with me saying that some of the critics are like used tissue, or feminine napkins, although he might be grossed out by it. But if he dare publish the Patois equivalent, my column would be cut faster than a tape being seized from a journalist by a Russian censor. And he would be out like fiery coal in a fridge.

Fifty-one years after Independence, it is a band of shame to speak Jamaican, unless it is spoken in a condescending fashion, as many of my middle-class Patois apologists tend to do. I am sure "unoo understand those ways!" Nevertheless, when the raw Jamaican language, which sounds as if the speakers were infused with goat DNA, is used, culturally brown Jamaicans, uncomfortable with their own ethnicity, baulk and turn down their noses.

Take carnival as an example of how divided and hypocritical Jamaica is. Carnival was introduced by some upper- and middle-class elements in the early 1990s or late 1980s. For years before, it was a local curiosity on the UWI campus as the other Caribbean students found a cultural oasis where a bit of home was recreated. In those days, the pulsating rub-a-dub and drum and bass might have appealed to me, the man from the lower classes, but it was unwelcome on campus. Jamaicans did not have an interest in carnival on the whole, until the deputy whites approved of it.

Nonetheless, for all my culturally tolerant mind, the image of Jamaican women, many of whom were respectable bankers, executives, doctors and other guardians of decency, skimpily clad, was too much to bear. Even when the women were less cellulite laden, it was still offensive to see them parading on the streets in very tight 'bitweenies', exposing their African tint on their posterior. And when the alcohol and heat of the moment soaked their brains, the uptowners, who normally 'spokey-speaky', gyrated and rubbed all parts of themselves on others, it gave a different meaning to the term 'dutty wine'.

So, it is all right when they do it because it's their thing. But open your conscience and tell me, what is the difference between a politician dancing carnival and playing mas, and a roots parliamentarian doing an ethnic ghetto dance? Answer: 'class' - and I mean it in the sense of it being social stratum as opposed to grace and decency.

Roger Clarke's daggering is simply a matter of people still under the colonial and plantation mentality, demonising the very same behaviour that they themselves demonstrate under other circumstances. Another word - hypocrisy.

Nevertheless, in as much as we say, 'Out of Many One People', the Caucasian Mr Marlowe and Mr Chan, the Chinese, might disapprove, but I bet Miss Simit, the black woman, and Miss Bacchas, the dark-skinned Indian, will raise their thumbs and flash their lighters.

Yet, I thank 'Mass Rajja' for the diversion, because there are so many other things that scare us. These are serious times. Hopefully, he will do more of the same and more of other things. After all, good exercise will prolong his career and certainly help him to maintain his livelihood.

Dr Orville Taylor is senior lecturer in sociology at UWI and a radio talk-show host. Email feedback to columns@gleanerjm.com and tayloronblackline@hotmail.com.