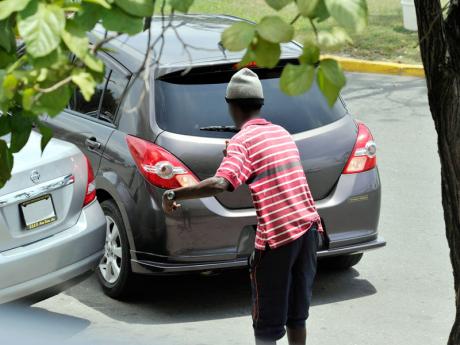 A man directing a motorist to park along Ocean Boulevard, downtown Kingston, yesterday. This is once again a big business in the shopping district as motorists must pay a fee to park. - Norman Grindley/Chief Photographer 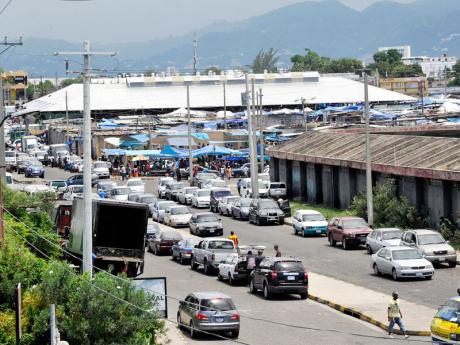 Most shoppers at the Coronation Market in Kingston have to pay 'parking fees' to men on the corner to do business in the market. - Norman Grindley/Chief Photographer
1
2

The actions of re-emerging extortionists, unlawful shoppers and illicit vendors are, once again, generating high drama daily on the streets of the busy business community, bringing back terrifying memories of the period prior to the 2010 incursion into Tivoli Gardens.

Unlike the days shortly before the military incursion that crushed extortion in Tivoli Gardens and neighbouring communities, the scourge has, in recent times, been rearing its head.

For Chairman of the Urban Development Corporation (UDC) K.D. Knight, complacency is to blame for the resurgence of criminality in the area.

Knight was, however, quick to stress that the police were working overtime to break the back of the problem that has crept into the area, seemingly without notice. "We must remove complacency, if it continues then crime will take over," said the former national security minister.

From Darling Street at one side of Coronation Market to Orange and King streets at the other end and along Ocean Boulevard near the new Digicel headquarters, the extortionists have re-emerged in their numbers.

Defiant street-side vendors are, once again, plying their wares on just about every corner, after the controversial clearance by the authorities more than two years ago.

In the absence of a central commanding figure, the extortionists appear to have carved out areas of control that add to the pervasive disorder in the area.

"It is an ugly sight, but there are some political implications," said Superintendent Steve McGregor, who is in charge of the Kingston Central police Division.

Stressing that police personnel in the hectic commercial locality had their hands full, McGregor complained that the general disorder was exacerbated by the proliferation of street people crowding the area.

"Many rather stay on the streets. They sleep in front of the City Centre Police Station instead of gong to the areas designated for them," said McGregor.

"This is higher than police. We lock them up and when they get out, they are back on the streets," McGregor added. "It needs executive intervention ... it does not augur well for the city."

For his part, Knight expressed unease that illegal activities have crept into the downtown Kingston commercial district and are frustrating the efforts to redevelop the area. "I am aware of the efforts being made by the Kingston and St Andrew Corporation (KSAC) and the police ... , which are very important because, if there is not a control of indiscipline and criminality, the task of marketing downtown Kingston as a place to invest is made much more difficult," Knight told The Gleaner.

The Gleaner can report that on weekends, the pre-dawn focus of the extortionists is directed primarily at members of the public who park on Darling Street to make early morning treks into Coronation Market. The men pick specific areas of control and charge a minimum of $50 for "finding" a parking space in their "turf".

During the course of the week as well as late morning on Saturdays, the extortionists venture into the areas on which large stores are located. Princess, Orange and King Streets appear to be favourite locations and they designate parking areas for motorists.

Ocean Boulevard is another target spot as the men bear down on motorists doing business in the range of government agencies and other private businesses in the area. Motorists are even allowed to park in areas designated by yellow lines as no-parking zones.

McGregor is of the view that extortionists are being encouraged by shoppers as well as business people. "Instead of using the official parking area, they park on the streets so, they make themselves a target," stressed McGregor. "The guys are given money to wash vehicles, while some business operators in the area even employ them to wash vehicles on the busy thoroughfares."

Knight said he was aware that part of the problem was unemployment. "I am also aware that the development and creation of jobs is an integral part of the control of crime, and so we are doing our best at the UDC to assist in creating the appropriate atmosphere where crime control can become less onerous," he said. "It must be a totally integrated process and the UDC is anxious to play its part."