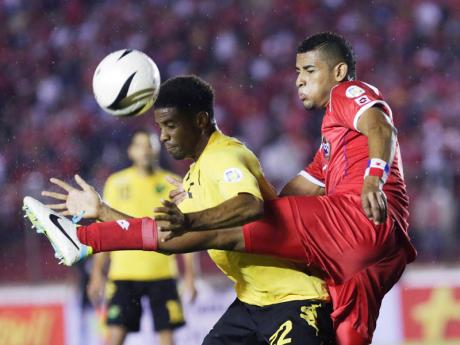 ALL HOPE seems lost. But the Reggae Boyz are not ready to throw in the towel yet.

With only three points and more-than-a win gap to the most reachable qualifying position, Jamaica's senior men's football team has no option but to claim all three points when they tackle leaders Costa Rica in CONCACAF World Cup Qualifying (WCQ) football action.

The lopsided showdown at the National Stadium featuring the team at the top of the ladder versus the one at the bottom is set to kick off at 7 p.m. and newly appointed head coach of the Jamaica team, Winfried Schäfer, is under no illusions.

Head-to-head, Costa Rica hold a distinct advantage, winning 11 of their 23 clashes as opposed to Jamaica's four.

All Jamaica's victories were scored at the National Stadium, with the last two - a friendly in 2010 when Ryan Johnson scored and a WCQ in 1997 when Deon Burton hit the net - being registered in September.

There are six teams in the qualification series, all chasing three automatic spots to next year's World Cup Finals in Brazil. The team that finishes fourth also gets a shot at Brazil 2014, but they must win a home and away tie against Oceania champions New Zealand.

Costa Rica lead the race with 14 points, after leapfrogging second-place United States (US) (13) with a 3-1 win last Friday night, when all the teams played their seventh match. Honduras are third on 10, following a massive 2-1 win at The Azteca over Mexico (eight), who slipped to fourth. Panama meantime, which the Boyz held goalless at Rommel Fernandez Stadium, have seven points. The teams have 10 matches apiece.

The Mexicans, at fourth, are Jamaica's target. If they beat the US and Jamaica lose then the Boyz are eliminated.

The Panama match left the Jamaican squad without two of its top players for this crucial game.

Team captain and goalkeeper Donovan Ricketts, who celebrated his 100th appearance, was shown a yellow card, which accumulated with others in previous matches to earn him an automatic one-game suspension.

Another of the team's most experienced players, top central midfielder Rodolph Austin, earned a red card with two bookings.

The goalkeeping situation has been whittling down since Ricketts' backup, Dwayne Miller, picked up an injury in training and was forced out of the Panama squad.

Gariece McPherson had originally been included and is contending for the starter's role with Richard McCallum, who was drafted for Miller. Now with Ricketts out, another goalie has been brought into the picture, Jacomena Barrett, to maintain three in the squad.

In the case of Austin's position, that seems pretty clear-cut. Marvin Elliott was brought in at the expense of striker Marlon King to maintain the central midfielder on the pitch. For the 30-odd minutes it worked.

Elliott, also, is one of only two Reggae Boyz to have scored in this decisive Hexagonal phase, a header in the first-leg 1-1 finish against Panama. He previously held down a starting spot before Schäfer left him on the bench Friday.

Striker Jermaine Beckford scored Jamaica's other goal in the CONCACAF Finals, in a losing cause (1-2) against the US. Beckford also held a starting place, before being relegated to the bench. Schäfer said he was in his plans for Friday night, but circumstances involving Austin's expulsion and an earlier defensive change that was forced - that of Alvas Powell at the 42nd minute - threw that out the window.

In terms of changes to the starting team, Elliott and Beckford weren't alone. Schäfer made eight changes to the Jamaica team that started the match before. The extent and personnel are uncertain thus far.

"I am not sure of the team as yet," the head coach said after training Sunday night. "We will see, we know we will have to make changes."

Importantly, he also changed the long-adopted 4-4-2 formation to 3-5-2, which provided better coverage and strength with an additional player at the back. That system also worked, as the Jamaica defence line battled hard and determinedly to protect a clean sheet and cut a four-match losing streak.

The task is expected to be harder against the Costa Ricans, who possess more guile and some very tricky attacking options, including captain Bryan Ruiz, Joel Campbell and Jhonny Acosta. They lost only one game, a controversial 1-0 defeat to the US in a snowy encounter; and have scored 10 goals, averaging nearly 1.5 per game.

That's almost the same rate at which Jamaica's defence have been conceding goals - eight in the seven matches.

There will be competition for those places today, with Adrian Mariappa eligible again after serving suspension for yellow card accumulation.

Schäfer has the option of playing all three again, as well as including Mariappa for Powell on a flank, to complement Shaun Cummings, who did okay on debut defensively. He may also start the same backline.

Offence is where the Reggae Boyz are lacking.

They have not won one game in the Hexagonal.

Luton Shelton, the country's leading goalscorer with 35 in 74 matches, was the most dangerous Jamaican attacker on Friday, and when the teams first met in Costa Rica and the homesters won 2-0.

Jamaica had outstanding early chances and did not convert at San Jose. In Panama they hardly mustered a threat.

Shelton, King, Jobi McAnuff, Garath McLeary, Jermaine Johnson and Beckford are among those in line for offensive duty. Their task is straightforward: outscore Costa Rica to keep Jamaica's dream alive.