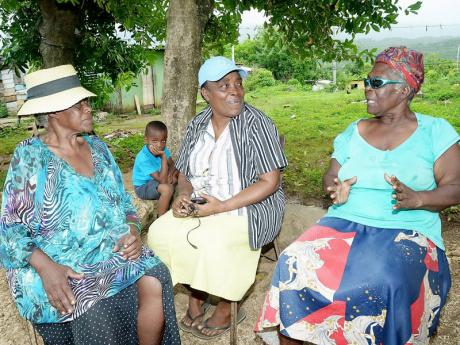 'Wa, wa, wild Gilbert. Wa, wa, wild Gilbert.' As far as the residents of Sandshore in Manchioneal, Portland, are concerned, no one could have summed it up better. Singer Lloyd Lovindeer captured the experience down to a tee in those now-famous lyrics.

Twenty-five years ago, on September 12, 1988, the mighty Category Three Hurricane Gilbert so completely devastated the seaside community, then Prime Minister Edward Seaga listed it among the worst affected areas. Gilbert later intensified to a Category Five.

The once-thriving seaport town, with its bountiful banana and coconut farms and robust fishing village, blossoming with hope and endless possibilities, was reduced to an unrecognisable sandy pile of rubble.

To the residents, Sandshore has never been the same since that devastation. Sadly, it is no longer teeming with lush cultivation and hopes of a vibrant town.

Each anniversary the memory comes flooding back. It's an experience the residents will always remember and pray to never go through again.

They remember how the sea rose like a furious, gigantic monster and swallowed up everything in its path for several metres.

They remember the panic and the screams as Gilbert attacked with strength and fierceness. Several of them were unprepared and caught totally off guard.

"It was awful. It was a sight. I never so frighten in my life. I never see anything like that and I never want to ever again," said Webber.

One of those who didn't take the hurricane warning seriously, Joan said, that morning after looking out and seeing the trees all bowing down, giving her a clear view of the sea charging towards her house, the only thing she could do was grab her seven-year-old son and run for their lives to a neighbour's house.

"When we come back, I couldn't find my house. We had to look and dash wey bush to find it. We couldn't believe this was Sandshore. Sand pile up everywhere, we couldn't find anywhere to walk. Trees, houses, everything totally flat," she shared with The Gleaner.

"At one point when I tried to clean water out the house, I just had to suck me teeth and leave. I just didn't know what to do. It was awful.

"I never see anything like Gilbert ever again. Is the first and only hurricane make me run leave my house. I never want to see that again. But we just have to give God thanks."

She said she learnt her lesson the hard way.

"Now I just want to hear a hurricane coming and we start prepare. We watch the sea and once we see it in rage, we know we can't stay down here," Joan stated.

With hurricanes before bypassing the island, Withworth, too, saw the warning as just another false alarm, so she was at home with her two-year-old son cooking. Suddenly she heard her housetop rattling then the zinc roof flew off. She ran outside with her son only to realise the sea had overtaken her yard, reaching her almost at the hips.

"I run with my son, reach my neighbour house, but the zinc fly off so we run to the Seventh-day Church of God and was there about two days. When we come back, we see fish and lobster everywhere and all the trees down," said Donna.

"You shoulda see the community. Sand pile up everywhere, trees flat, house flat, animals dead. We couldn't recognise it. It was so difficult for us to know where we live. It was awful. It take such a long time to clean up."

She admitted: "I really wasn't prepared for it because I say it was going to turn back like the others. We really thankful it never come in the night, or it woulda be much worse."

Kenneth Bryan was a godsend for many of his neighbours. That day, he gave shelter to close to 30 residents in his concrete house located on the main road. Some stayed for months after.

"Who doesn't need a helping hand? That's what we are here for," said the humble unsung hero as he sat on his veranda looking out.

"Listen, when the breeze begin to blow zinc, it was like you open a book and the leaves blowing wildly. Anybody could be chopped by those flying zinc so we allowed everyone to come in."

Now 86 years old, Bryan said the community that he has spent all his life in has never been the same since that fateful day.

"Bwoy, Gilbert blow down me house and left me stand up outa door. When me come back, only the floor me see," Francis recounted.

For Whyte, "When we come back after Gilbert, Manchioneal look different. If we didn't have the gas station down the road we wouldn't know it was Manchioneal. We couldn't recognise the community."

Henry added: "Thank God for Mr Seaga. Him mek sure we get plenty food. We never hungry at all. And the soldiers come help us. We get tarpaulin, zinc, and some things to help us."

Standing in her yard looking out at the choppy sea as a light drizzle of rain sprinkled Sandshore, 61-year-old Fae Burnett, said: "Maybe if Gilbert never came, here would have been more populated, but people are afraid, really afraid to come here.

"We had so many coconut trees, it was like a huge grove. But Gilbert destroyed all of them. We tried replanting them, but strange enough they always died. Coconut trees just haven't grown here since Gilbert."

Fae added: "This community has just not been the same since that day."

The residents of the quiet, peaceful community said they are all thanking God for sparing their lives, accepting that, despite the devastation, they know it could have been worse.

But undoubtedly Hurricane Gilbert did teach them a valuable lesson. To always be prepared. Now, as soon as there is the slightest hint of a storm on the horizon, they go into action mode and keep a lookout.

Gilbert was a lesson well learnt.