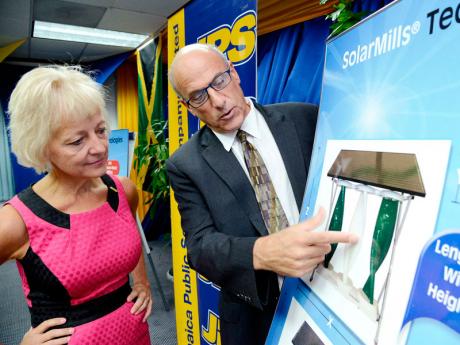 AS THE cry for cheaper energy sources gets louder, the Jamaica Public Service (JPS) company has signed one of its first major agreements with the American company, WindStream Technologies, to bring some 1,000 SolarMills into the island by October.

Kelly Tomblin, CEO and president of JPS, expressed confidence that the SolarMills, which harness both wind and solar power, will be game changers in the Jamaican market.

The move comes as Jamaicans step up the pressure on the light-and-power company to deliver cleaner, cheaper and more reliable sources of energy.

"One of the cries from Jamaicans is the need for alternatives, and the SolarMill goes and takes the solar installation one step further, because when the sun is not out the wind is still blowing. So it really gives you more power for your dollar," she asserted.

Tomblin said this product was a distinct solution for the market and customers were already asking for it.

President of WindStream Technologies, Daniel Bates, said the SolarMill would provide a viable option to complement energy needs in the country, adding that it could be utilised by residential and commercial customers.

"The energy rates that Jamaica's population pay are very expensive, from what I understand. We think that being able to supplement your power needs with renewable resource can dramatically reduce these costs," Bates said.

He said the SolarMill units were already being piloted in different locations across the island, and at the time of its roll-out, customers would be guided by professionals to help determine the locations in which the units would work best.

Both Bates and Tomblin refused

to say how much customers would be required to pay for one of these SolarMills. However, Bates admitted that the materials to build the units were costly as they were made from galvanised steel.

But the man credited with
introducing JPS to these hybrid energy generators, Eaton Haughton, said
he paid some US$3,000 for his unit last
year.

Haughton, an energy consultant, said after
Hurricane Sandy last year, he was left without adequate power for days,
and so he went in search of a reliable alternative energy source and
stumbled upon the SolarMill.

He said after using the
product on his house, he decided to advise JPS about WindStream
Technologies.

Haughton noted that he has seen a marked
reduction in his electricity bills.

"Jamaica has been
making a mistake. We have been bashing Government and the utility
companies, and most of the times we do nothing about our energy usage.
So I was determined that we needed to do something in an economic way,
and in this regard I brought the idea to JPS," Haughton
said.

The SolarMills are to be made available in JPS'
eStores.