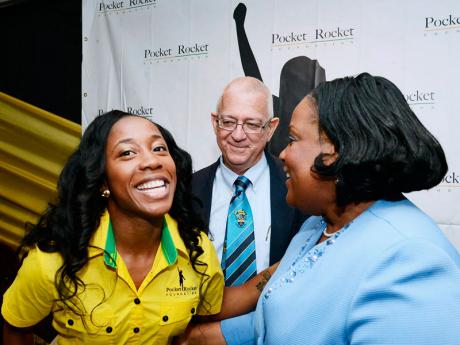 Following her historic performance at the recently concluded World Championships in Moscow, Shelly-Ann Fraser-Pryce said her feat was met with disdain from some competitors on the track.

The first woman to win three gold medals in a single staging of the IAAF World Championships in Athletics said allegations of doping were levelled at her by other athletes during the meet.

"Some thought I was on drugs for me to have done what I did. I don't know why," she said.

Fraser-Pryce said most of the athletes expressed negative comments and some even went as far as to accuse her face to face.

"I hear people say things and ask questions and how can I do that (win three medals) and how I can have such a long season and still go at the end of the season and run so fast," Fraser-Pryce noted.

"I didn't get any fancy hurrah. Some persons thought it was nice and it was good, but (the) majority of the athletes had their negative comments," she added.

However, Fraser-Pryce said she has managed to brush aside the naysayers, as their opinions are simply that - "opinions".

She said the only thing she can be accused of doing is training hard and maintaining her form throughout what was a gruelling season.

"I've run 10.7 from 2008. I have not done anything that nobody else has ever done before, apart from winning three gold medals, but it was just hard work. The times were not ridiculous; it was just very good execution. I am a very good starter," she noted.

She said that persons will always be quick to criticise and make snide comments, not knowing the level of work she puts in during training, and as a result she is not affected by these comments.

Fraser-Pryce made the comments during yesterday's presentation ceremony at Devon House of her Pocket Rocket Foundation, where seven children were awarded scholarships, each valued at $100,000.

As long as they maintain good grades in school, as well as represent their institution in sports, they will benefit from a scholarship each year, until they graduate from high school. The money will go toward the cost of tuition, fare, books, stationery, lunch and other needs of the recipients.

GraceKennedy is backing the Foundation to the tune of $1 million, earned in 10 cents from the sale of each can of Grace Vienna sausage.