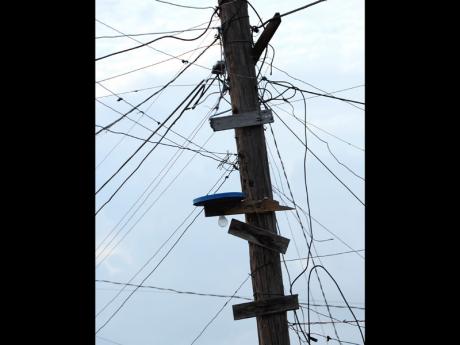 The Jamaica Public Service Company (JPS), the island's main supplier of electricity, is reporting close to 600 arrests for electricity theft between the start of the year and last Friday

The latest arrests came last week during an early-morning operation in New Kendal, Manchester, where JPS teams removed a total of 75 illegal connections.

Four persons have been summoned to appear in court, including the operators of two bars and a cookshop.

JPS Corporate Communication Officer Audrey Williams noted that the company has always been on a drive to reduce electricity theft.

"In 2012, the programme was intensified, with over 200 members of staff and over $50 million being dedicated to carry out the loss-reduction [initiatives]," she said.

"We have, however, ramped up our efforts since the start of the year and have been carrying out several operations each week, in virtually every parish in Jamaica, particularly in areas with high incidence of theft."

Williams said JPS lost US$30 million to electricity theft in 2012.