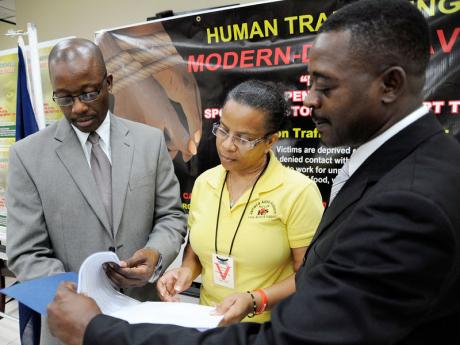 With 24 children reported as victims of human trafficking since the start of the year, the Organised Crime Investigation Division (OCID) has expressed concerns over what it says is a worrying trend that is increasingly shows males as victims.

Deputy Superintendent of Police Carl Berry, head of the Anti-Trafficking in Persons and Intellectual Property Vice Unit, said that 21 of the 24 children were Honduran nationals who were sent to Jamaica.

"Sadly, all 24 victims are children, some of them under the age of 15. It's a situation that we are grappling with because children continue to be the most vulnerable," said Berry.

The senior cop was speaking at a press conference in observance of International Day Against the Sexual Exploitation and Trafficking of Women and Children at OCID's offices in downtown Kingston yesterday.

"It keeps evolving because the 21 Honduran kids that were rescued are all males. There continue to be changes, and we keep seeing different patterns," Berry said.

Justice Minister Mark Golding yesterday told The Gleaner that human trafficking continues to be a challenge, but expressed confidence that the appropriate legal and regulatory framework is in place to stamp out the practice.

The United States State Department has a four-tier system for ranking countries' responses to human trafficking. Jamaica has been recently upgraded from a Tier Watchlist rating to Tier 2.

"We can never get complacent with any form of crime, but we have been steadily increasing the fight against human trafficking in Jamaica, having strengthened the legislative framework, which will enhance prosecutorial effectiveness by expanding the range of offences for which charges may be brought against offenders," Golding said.

In the courts yesterday, the trafficking in person case against Hermalinda Parker, former proprietor of the Latin Movement Nightclub at Dunrobin Plaza, St Andrew; her husband Anthony Parker, and her daughter, Lynn Scantlebury, was set for trial on February 17 next year.

In September 2011, the police received a report and a sting operation was carried out at the club where a number of persons were arrested.

The Crown is alleging that young girls were recruited from abroad and forced to work at the club. It is further alleged that in one case, a 16-year-old was recruited from Guyana under the guise that she was spending her summer vacation in Jamaica.

She was forced to work at the club - dancing and engaging in sexual acts - after she was told that she had to work to pay for her living expenses and plane ticket.