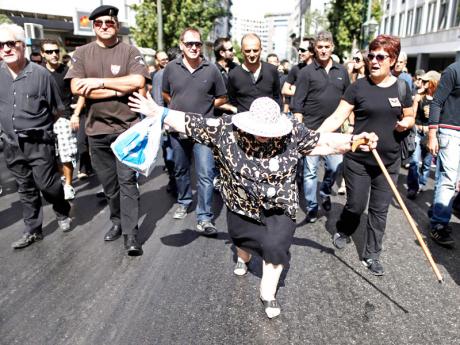 An elderly woman takes part in a protest with municipal police officers in central Athens. About 500 protesters, many wearing black, marched behind a hearse bearing a coffin symbolising the demise of the municipal police, which is being disbanded as part of plans to trim Greece's bloated public sector. - ap

Medical marijuana is now a growing industry in the United States (US) and that country's Attorney General Eric Holder has said the federal government will no longer attempt to fight the 20 states that, in one form or another, have legalised the weed.

I was quite surprised therefore, when I read that Dr Dayton Campbell, a medical practitioner and member of parliament, claims that there will be wide-ranging negative effects if Jamaica decriminalises marijuana.

Even more surprising, he has adopted this position when it is a matter of public record that Dr Sanjay Gupta, the Medical Correspondent of CNN is on record advocating its decriminalisation for medical use. It seems Jamaica may well be left behind in the new drug research and industrial potential that can be gained from the decriminalisation of marijuana.

I believe Dr Campbell's point of view is not supported by any medical or social scientific facts. Indeed, modern research reveals that society stands to gain from developing a more enlightened attitude to ganja.

By decriminalising ganja, we will reduce the social conflict/tension between law enforcement and marijuana users. We would also be reducing the criminalising of our people, especially Rastafarians, for doing something that is a historical, religious and cultural norm.

Third, Jamaica will join the race to maximise the medical industrial gain, which can be derived from the development of medical marijuana use.

Research on this issue reveals that there are in fact more positive than negative effects to be had from the legalisation of marijuana. In a recent study, the US Cancer Institute looked at the positive and negative therapeutic effect that marijuana has on cancer patients. In its introduction, the study reinforced what many Jamaicans have been saying for years.

To quote: "The use of Cannabis for medicinal purposes dates back at least 3,000 years. It came into Western medicine in the 19th century and was said to relive pain, inflammation, spasms, and convulsions."

The US Cancer Institute in its study published online, outlined the historical attitude of the US Government to marijuana, prior to its prohibition, pointing out that up to 1937 it was legal and taxed, $100 per ounce, for recreational use, under the Marijuana Tax Act. It wasn't until 1942, based upon opposition by the American Medical Association that it became prohibited. That year it was removed from the US Pharmacopoeia, the registry for drugs. In 1952, the federal government went further. Congress passed the Boggs Act in 1951 and thereafter, marijuana (cannabis) became classified as a narcotic.

There is now a complete reversal of fortune for the weed. Now, two cannabinoid drugs are approved by the US Food and Drug Administration for the treatment of chemotherapy-related nausea in patients.

This historical background is very important since Jamaica takes its cue from America on many issues including the prohibition of ganja. Holder now says that the federal government will not seek to prioritise the enforcement of federal laws governing marijuana use and will leave it up to governors and the respective states to create their own legal and regulatory framework.

The new attitude of the American government is based on the growing reality that marijuana use is budding from the ground up and is so strong that it can't be uprooted by Federal regime.

Marijuana legalisation has made great strides in America. To date, 20 states have passed laws that say there will be no prison time or criminal record for marijuana use. In these 20 states marijuana use is treated similar to a minor traffic violation.

Medical and economic consideration and social reality are driving the emergence of new norms and social values and other attitudes towards marijuana. Below is a summary of drugs made from cannabis; the pharmaceuticals companies involved; and approval status by the respective regulatory authorities.

Sativix was approved on June 21, 2010 by the British Government as a prescription- based cannabis drug extract. The British drug company GW Pharmaceuticals is the approved manufacturer. It has been approved to treat neuropathic pain and spasticity in patients with multiple sclerosis.

Patients undergoing cancer treatment (chemotherapy) will also be prescribed this drug to alleviate their pain and the potentials side effects.

Otsuka Pharmaceutical of Japan is doing research on marijuana extracts to treat ulcerative colitis, a type of inflammatory condition of the bowels that creates insults to the digestive tract.

Dronabinol/Marinol is being produced by Unimed Pharmaceuticals. The US FDA approved the drug for nausea (1985) and appetite stimulation (1992). It was approved in Denmark (September 2003) for multiple sclerosis. Canada approved it in 2003 for AIDS-related anorexia nervosa, an eating disorder and for nausea and vomiting associated with chemotherapy cancer treatment.

The Hebrew University in Jerusalem is also doing research on cancer drug for the treatment of hypertension (increased blood pressure) and to reduce inflammation within our tissues and cells.

While Dr Campbell, as a public servant would be protective of public well-being, on the face of the evidence, it would seem that he is not aware that Jamaica needs to change its attitude, decriminalise ganja, and seek to maximise the potential of a medical marijuana industry.

Norris McDonald is a journalist. Send feedback to columns@gleanerjm.com and miaminorris@yahoo.com.