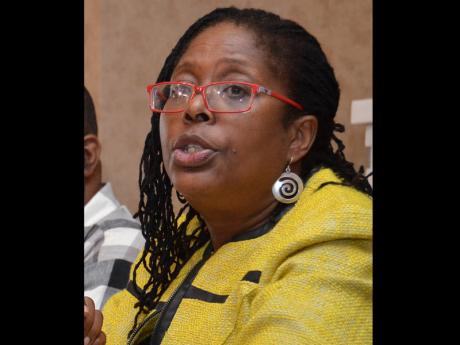 WITH PROPERTY tax arrears for the Corporate Area hitting the $1-billion mark, Kingston Mayor Angela Brown Burke has warned that this could impact a number of essential and quality-of-life services.

The money collected from property tax is used to pay for street lighting, garbage collection and the maintenance of community centres and parks. Ten per cent is used for the administration of local authorities.

Citing garbage collection as an example, Brown Burke said the plan is to move to more frequent collections instead of once per week, as is now the case.

"But you can't move to once per day, for example, unless you can pay for it. So right now, all we can pay for is once a week," the mayor emphasised.

"Everybody is talking about 'oh we want to see a clean city'. If we don't pay the property taxes that allow us to pay for those services, we can't have a clean city," she continued.

"And if we don't have a clean city, then it has other sorts of implications... how people feel about themselves, how people see themselves, and how they interact with each other, and it has implications for public order," Brown Burke added.

Last year, landowners in Kingston and St Andrew forked over $756 million in property tax, just over $100 million more than was collected for the previous financial year.

Despite this, however, data from the Ministry of Local Government and Community Development show that $315 million in property tax went uncollected last year, pushing the total arrears to just over $1.18 billion since the 2006-2007 financial year.

The Kingston and St Andrew Corporation (KSAC) has projected that it will collect just over $1 billion in property tax for this financial year.

Nearly halfway through the financial year, Brown Burke said the projections remain on target, but warned of the impact to Corporate Area residents if collections falls off track.

"If we fall short, then it means that even collecting garbage once per week is going to become a challenge," she emphasised.

"When we have natural disasters and we have to do anything extra, this is what would pay for it, as well, so then that becomes a challenge," she added.

While the KSAC has adopted a number of strategies to encourage landowners to pay up, it has indicated that tough measures are also being contemplated.

One of those measures, according to Town Clerk Errol Greene, is the execution of a warrant of distress on delinquent landowners who have also failed to honour payment arrangements negotiated with the KSAC.

A distress warrant allows local authorities to enter the property of a delinquent owner and seize anything of value that will be sold and the proceeds used to pay off the outstanding amounts.

"We have a lot of people who we make arrangements with them [and] they either give us 'bounce' cheques or they don't honour the agreement," Greene noted.

In addition, the mayor reiterated that the KSAC is discussing with the tax authorities the possibility of barring persons from doing business with the Government if they have outstanding property tax.

"You can't be doing business with the Corporation [KSAC] and at the same time depriving us of funds," she explained.

However, Brown Burke said the KSAC will conduct an analysis of its public-education campaign before deciding whether to pursue these options.

Property tax is a charge levied on all lands. Under the Property Tax Act, persons defined as owners, occupiers or mortgages are liable to pay the tax.

The mayor concedes that the compliance rate of 58 per cent for Kingston and St Andrew is low "in terms of where we want it to be", but disputed claims that a majority of persons are refusing to pay their property tax.

"When you look at the percentage that we have collected so far [this financial year], in comparison to what is budgeted for, it doesn't show that," she insisted.

One of the reasons for the low compliance rate, Brown Burke sought to explain, was that there are a number of properties in the Corporate Area which the KSAC has labelled 'uncollectable'.

"Either because the lots don't have any owner, we can't find the owner, or a number of other things," she noted.