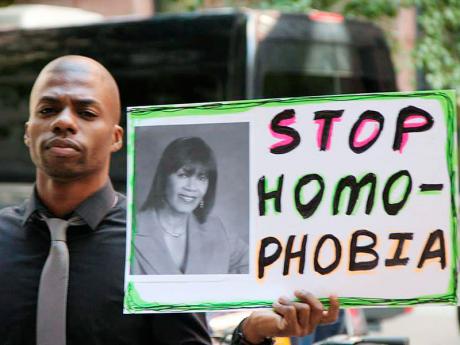 A protester stands outside the Ford Foundation's offices in New York yesterday with a placard bearing an image of Prime Minister Portia Simpson Miller.

Prime Minister Portia Simpson Miller was forced to halt her exit from the 68th United Nations General Assembly in Manhattan, New York, yesterday afternoon, as a group of gay activists protested outside the Ford Foundation offices.

The group of seven protesters shouted, "Gay rights are human rights!" and "Portia, shame on you!" as Simpson Miller exited the building.

Simpson Miller appeared unper-turbed, waving at the protesters and blowing kisses, but was later redirected by a security detail.

A group called Jamaica Anti-Homophobia Stand was calling for an end to Jamaica's anti-gay laws.

It, along with other gay-rights lobbies, is planning to stage another protest on Saturday morning, when Simpson Miller is slated to address the UN General Assembly.

In 2011, Simpson Miller, then the opposition leader, promised a conscience vote in Parliament on whether to repeal Jamaica's anti-gay laws, but that is yet to happen.