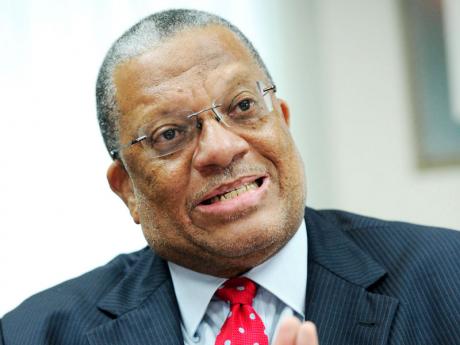 DECLARING THAT the country still has a very difficult period before it, Finance Minister Dr Peter Phillips says there is no place for complacency in implementing Jamaica's economic programme.

Phillips sent the signal yesterday following a decision of the Executive Board of the International Monetary Fund (IMF) to approve the completion of the country's first review under the extended fund facility (EFF).

"It is still very early days and we have to maintain the same level of vigilance ifwe are to reduce the debt and to establish the conditions for growth," Phillips told The Gleaner yesterday.

The completion of the first review enables the disbursement of 19.97 million in special drawing rights (SDR), or about US$30.6 million, which would bring total disbursements under the arrangement to SDR 156.72 million, or about US$240.4 million.

Phillips yesterday told The Gleaner that the Government was pleased that the board has ratified the recommendations of the IMF staff.

"I think everybody recognises that it was a very strong commitment on the part of the Government of Jamaica and the authorities generally to achieve this result," Phillips said.

He added: "We are confident of the second quarter out-turn, and we will continue to do all that we can."

Nayouki Shinohara, deputy managing director and acting chair of the board, has said the overall programme implementation "has been strong, despite the weak economic environment".

"The authorities' continued commitment to the programme objectives of strengthening Jamaica's fiscal position and creating the conditions for sustained economic growth will be critical to a revival of investor confidence and domestic demand in the period ahead," Shinohara added.

Jamaica's economic programme is built around the objective of reducing the country's high debt from an estimated 150 per cent of GDP through the implementation of various structural reforms to strengthen the fiscal framework.

The IMF noted yesterday that priorities for this financial year include the enactment of an effective fiscal rule to lock in the gains from the fiscal adjustment thus far, and comprehensive tax reform to broaden the tax base and reduce distortions.

Phillips said yesterday that given the state of the country's finances, the Government has no choice but to undertake the reforms.

"It does involve a lot of difficulty for many, many people, but it is a necessary set of reforms if we are to lay the foundations for growth," Phillips said.

Economic activity is estimated to have contracted by 0.7 per cent last fiscal year, with a further decline from April to June. At the same time, the unemployment rate increased to 16.3 per cent at end-April 2013, and inflation reached 9.7 per cent (year-over-year) in July 2013.

The minister said he expects that Jamaica will gradually see a return to growth and job creation.

"But it is no doubt that we have a very difficult period before us, it has been difficult, still difficult, I think what we have to understand is that like any course of treatment for any individual who has to undergo a medical procedure, or any change in direction, it involves hardships, but we need to be clear that there is an end objective," Phillips said.

He added: "For us, the end objective is the reduction of the debt, the return of growth, by setting in place the conditions that facilitate investment in all the various sectors."

The IMF board approved a four-year EFF arrangement for Jamaica in May to support the country's comprehensive economic reform agenda. The EFF arrangement amounts to 615.38 million SDR, or about US$932.3 million, the equivalent of 225 per cent of Jamaica's quota in the IMF.

The financing arrangement forms a critical part of a total funding package of US$2 billion from Jamaica's multilateral partners, including the World Bank and the Inter-American Development Bank, with each having preliminarily agreed to allocate US$510 million over the next four years.