Sam Sharpe and Kissing the Book 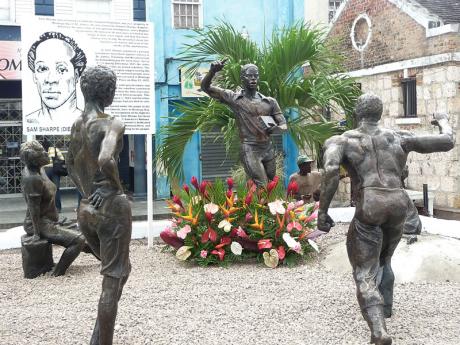 Statues of National Hero Samuel Sharpe and his followers in Sam Sharpe Square, Montego Bay. Sharpe was executed in 1832, one year before the Emancipation Proclamation. File

In his recent publication, Kissing the Book: The Story of Sam Sharpe, as revealed in the Records of the National Archives of Kew, biblical scholar and historian, Larry Kreitzer, of Regents Park College, Oxford University, explores the court trial documents of April 19, 1832, and gives the final stages of Sharpe's life the studious attention it deserves. Kreitzer, through his meticulous examination of primary source material, cited the role of Sharpe as a leader of the 1831 Baptist War and highlighted the significance of swearing oaths on the Bible. Kreitzer's blurb claims that this study, for the first time, presents a full critical edition of the court trial documents related to the life of Sharpe.

Kreitzer confirms that Sharpe was a skilled interpreter of the Bible. Paul Fiddes, another Oxford scholar, made a similar point at the July 2013 Baptist Word Alliance Annual Gathering about Sharpe's interpretative biblical skills.

There is a growing awareness that Jamaicans who did not go to theological college had an authentic interpretation of the Bible. Last month, a news item stated that Dean MacNeil, USA author, who has researched Marley's music for 20 years, has written the book, The Bible and Bob Marley, which focuses on parts of the Bible that Marley quotes in his songs, including So Jah Sey, Running Away, Africa Unite and Small Axe.

Both Marley and Sharpe had scriptural foundations for their main thoughts, aims and actions. Sharpe's hermeneutical approach to the Bible was a major motivating factor in helping to dismantle brutal slavery in Jamaica and the British West Indies. It is important to understand that the Bible has principles that can enable the world to struggle against oppression, and injustice and work towards peace and prosperity.

It is instructive that British scholars are showing such interest in the life and work of Sharpe. Sharpe's model can help the British society establish itself as a multi-racial society and also help Britain to re-define its relationship with its former colonies and present dependencies.

Last month, at the United Nations (UN), Prime Minister Portia Simpson Miller rightly called for reparations based on colonial slavery in the Caribbean. However, not only should we concentrate on the injustices of the past, but also on the legacy of injustices in the present. The UN must give greater impetus to its decolonisation committee. In this day and age, it is hard to justify the USA having military bases in Germany and Cuba. It will be a huge task to dismantle these bases, but, like the Berlin Wall, these anachronisms of war should go. We are getting rid of chemical weapons and, for the safety of human beings, other elements of war such as nuclear weapons need to go. Barack Obama, president of the USA, after six years, is unable to keep his election promise to close the prison at Guantanamo Bay, so dismantling the military bases will be more difficult. In this day and age, why is Britain having dependencies in the Caribbean, Malvinas (Falklands) and Gibraltar? In this day and age, what is Russia doing with a Japanese island? The Church has a vested interest in having these and other border disputes rectified because most date back to the Pope dividing the world into two among superpowers in the 15th century.

Sharpe and Marley spoke to injustices in the world. We should pledge our commitment to justice everywhere for all peoples.

Sam Sharpe kissing the Bible reminds us that, through godly principles, slavery was wounded but the death knell for oppression is yet to be accomplished. Therefore, descendants of Sharpe must arise.