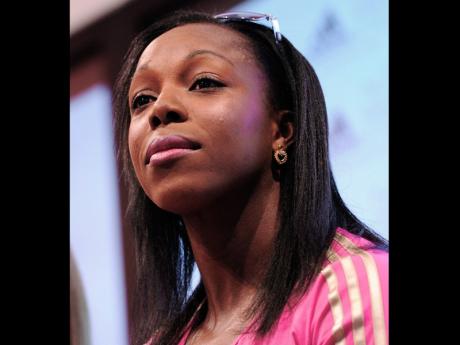 At least two unnamed officials are warning that the recommendation by the Jamaica Athletics Administrative Association (JAAA) disciplinary panel, for embattled Jamaican sprinter Veronica Campbell-Brown to receive a public warning after testing positive for a banned substance, is unlikely to be upheld by the IAAF or go unchallenged by the World Anti-Doping Agency (WADA).

The panel, which was chaired by former chief Justice Lensley Wolfe and also included president of the Medical Association of Jamaica, Dr Aggrey Irons, and attorney Lincoln Eatmon, has submitted their recommendation of a public warning to the sport's governing body, after the 31-year-old returned an adverse analytical finding at the May 4 Jamaica International Invitational.

However, one well-placed insider, who asked not to be named, noted that the recommendation is indicative of issues with the Jamaica Anti-Doping Commission's (JADCo) methods and believes that any ratification by the IAAF is likely to lead to the involvement of WADA, who the source believes could take the case to the Court of Arbitration for Sports.

"The most important thing now is to hear the reasons for the public-warning recommendation," said the source.

"It must be that something went wrong; was it the JADCo methods, chain of custody or perhaps they had solid evidence that it was given inadvertently by a medical practitioner?"

"Honestly, I believe that it is unlikely to be upheld; if that happens, then I would be surprised."

Another official close to the case believes that perhaps the panel felt that Campbell-Brown, who was provisionally suspended on June 18, which led to her missing the IAAF World Championships in Athletics in Moscow, had served enough time on the sidelines for the violation.

"Remember, she (Campbell-Brown) has been suspended for almost four months now, so it could also mean that the panel felt that this was already enough time for her given the offence," said the official.

The Campbell-Brown hearing was hit with early setbacks, as a number of important documents, such as the chain of custody forms and witness statements, were not available at the onset.

"If they believe that the drug-testing procedures in Jamaica are not in accordance with the rules and standards, then there shouldn't be any problems; but if that's the case, then JADCo will have to answer to that," the source added.

Campbell-Brown has denied knowingly taking any banned substance through a release issued by her manager, Claude Bryan, shortly after the finding. IAAF official Nick Davies had described the offence as 'minor' shortly after news broke of the finding.