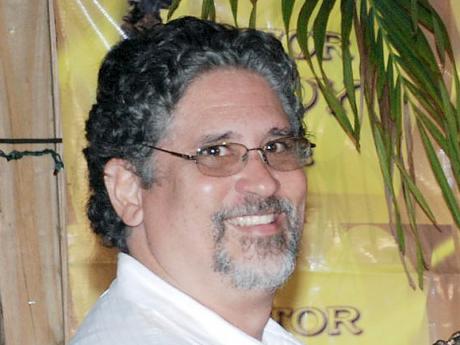 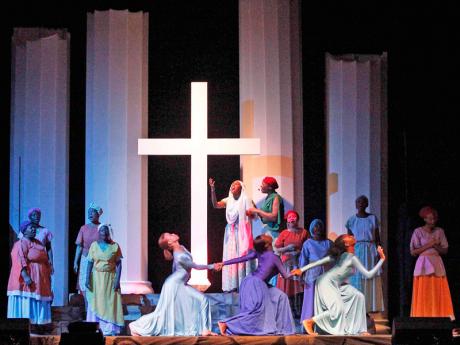 Robin Baston's set that included a cross and large pillars make the backdrop for the performance of 'Mary's Lament', a piece which was part of the ongoing staging of 'Candles In The Dark', at the National Arena. - Contributed
1
2

"I have no problem with people interpreting the pillars as candles," Robin Baston told The Gleaner. His response was in reference to remarks made about the set he designed for Father Ho Lung and Friends' latest production, The Greatest Hits: Candles in the Dark.

Baston is the technical director of the Brothers of the Poor's annual productions. This year, he was given the additional responsibility of set designer after P.J. Stewart took a leave of absence.

For more than 12 years, Stewart was the set designer for the group's annual production. And so, Baston, an architect by profession, consulted with the team, which included Greg Thames (director), Paula Shaw (choreographer), and Father Ho Lung.

In fact, all things go by the team.

"We work as a well-knit group." Baston revealed.

But unlike the epic dramas of the past, The Greatest Hits: Candles in the Dark was more like vaudeville or a rebranding of Praise Him (a concert comprising eight or so singers used to introduce upcoming events or the opening of a new place by the Brothers of the Poor).

And so, in light of the nature of the show, Baston said he went for something simple. This 'simple' Baston refers to included huge white pillars representing a cathedral in Segment One and a forest in Segment Two of the programme. It could have been even 'simpler', but budgetary constraints made Baston decide against having trees placed around the National Arena.

The cathedral and the forest represent the timeless and solid nature of the show. Just as the Roman Catholic Church has shown itself virtually indestructible, and just as trees have always been with human beings, the show is here to stay.

The creation of a set that changes from cathedral to forest seamlessly was no easy feat. Baston said it was a challenge.

"How do we transform columns into trees while making them safe for the actors? The brothers are very talented, but they are not theatre persons, and so would not be certain how."

Baston, thus, had to keep close tabs on the workmanship that went into developing the set, at least initially.

"But once they got past that, I could leave them to work," he said.

Baston went on to explain that being an architect has always been helpful in the area of set design.

Interestingly for Baston, working on a set, a much smaller undertaking than other feats of architecture, tends to be more time-consuming.

"Much can go wrong in a short time, especially with the Dandy Shandy designs that Greg is looking for."

The Greatest Hits: Candles in the Dark returns to the National Arena on Saturday after a week's break.