The Myrie case and human rights 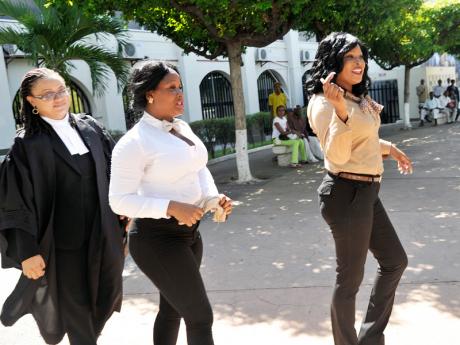 A jubilant Shanique Myrie (right) leaves the precincts of the Supreme Court in downtown Kingston on October 4 after the Caribbean Court of Justice verdict in her favour. Trailing her is sister Antonette DaCosta (centre) and attorney Michelle Brown.-Norman Grindley/Chief Photographer

Some of the facts established in the Caribbean Court of Justice (CCJ) landmark original jurisdiction decision in the matter Shanique Myrie v Barbados make for uncomfortable reading. Ms Myrie was cursed at, had her phone searched, was held in an insanitary detention facility, then sent back on a flight to Jamaica.

She was never given a chance to shower before boarding that flight, and was escorted to the plane in a manner that made it clear she was being deported. Above all else, she was subjected to an illegal body cavity search in demeaning and insanitary conditions. This was clearly inhumane and degrading treatment - of the type no national court in the region would countenance.

Despite this fact, the CCJ did not rule in her favour on the basis of human rights breaches. The court, from early out, indicated it had no jurisdiction to adjudicate international human rights treaties or conventions, in particular the Universal Declaration of Human Rights and the International Covenant on Civil and Political Rights, as pleaded by Ms Myrie. That the Court could not do so cannot be challenged.

As was pointed out in the judgment, the court's jurisdiction under Article 211 of the Revised Treaty of Chaguaramas (RTC) and Article XII of the Agreement Establishing the Court constrains it to interpret and apply the provisions of the RTC and what the court termed 'secondary legislation' produced through the decision-making processes of CARICOM. Therefore, if there was any breach of Ms Myrie's rights, it had to flow from the treaty itself.

The CCJ identified the right of free movement in a decision of the Conference of Heads of Government of CARICOM in 2007. The right in issue was to an automatic stay of six months upon arrival in Barbados, a right which was itself part of the "broader concept of free movement of Community nationals within the Community". The essential elements of this right are that entry into, and exit from, member states be definite, hassle free, and "without harassment or the imposition of impediments".

Member states do, however, retain the right to refuse entry to persons who are undesirable or could become a charge on public funds. The CCJ held that the ability to refuse entry is an exception to the right of individuals to move freely and is, therefore, to be construed "narrowly and strictly".

Importantly, the burden of proving that a refusal is warranted rests on the shoulder of the state. In this case, Barbados did not discharge its burden of proving that Ms Myrie was "undesirable", as defined by the court, and no arguments were advanced as to her being a charge on public funds. Ms Myrie's right of movement within the Community was, therefore, breached.

What of the consequences of Ms Myrie's treatment? The court accounted for this treatment by awarding non-pecuniary damages, that is, damages that cannot be easily measured in money. The body-cavity search and the condition of the detention facilities were found to be "very serious" breaches of Ms Myrie's right of entry and were sufficiently connected to the exercise of that right to meet the criteria for the award of damages as developed in the court's case law.

In so doing, the court was adamant in pointing out that it was not awarding damages for "fundamental or human rights breaches" but for breach of the right to travel within the Community "without harassment or the imposition of impediments".

There was, however, a path through which the court could have pronounced on the clear human-rights breaches in this case. In its earlier less-publicised cases, the CCJ has recognised the existence of what it termed 'Community law'. The first recognition of this source was in Trinidad Cement Limited v CARICOM (grant of special leave), where TCL was granted leave to challenge the decisions of the CARICOM Secretariat to suspend the Common External Tariff (CET) on cement in 2008.

The CCJ held that community actors were susceptible to judicial review although there were no express provisions of the treaty to that effect. The court found this principle to be part of community law through its ability to apply such rules of international law as are applicable in interpreting the treaty, for example, the law on ultra vires of international organisations.

There was, however, a much broader source of law from which the court was willing to rely - "principles and concepts common to the laws of member states". In that single statement, the court had set the basis for introducing several principles of law into Community law, not just the review of Community acts.

It is on this basis that human-rights norms can form part of Community law. Basic human-rights standards are principles and concepts common to the laws of all CARICOM member states. Moreover, all these states have written constitutions containing provisions for individual protection from inhumane and degrading treatment, and where savings-law clauses exist, they do not preclude review of the treatment to which Ms Myrie was subject. So no matter the territory, these norms would apply in full force.

Introducing human rights through this method would not have been an unreasonable exercise of the judicial function. Authors such as Takis Tridimas, in defending the incorporation of these norms by the European Court of Justice in the 1970s, points out that member states could hardly have wanted to violate their own constitutional norms by becoming members of the then European Economic Community (EEC). The same reasoning could apply in CARICOM.

Furthermore, given the centrality of the individual in the Caribbean integration movement, and the aim of the 2007 conference decision to enhance the sense that nationals belong to, and can move within the Community, it makes sense to afford those individuals protections they would have under national laws.

To this extent, the court's reluctance to expand its case law by incorporating human rights as a principle of Community law is regrettable. It is, nevertheless, important to note that the court recognised that it could use international human-rights principles to resolve a case "properly brought in its original jurisdiction" since it has the power to apply "such principles of international law as are applicable" in adjudicating cases under the RTC.

Unfortunately, the court did not indicate how such a claim could have been properly brought. Indeed, some observers of the court's original jurisdiction decisions were of the view that if the facts of the Myrie case were proved, there would have been a clear basis on which to include human rights into Community law.

A possible rationale for this reluctance could be that the court prefers to build its jurisprudence incrementally. According to this view, since a basis could be found within the existing contours of the treaty, and there is clearly established case law to remedy the harm found to have taken place, there was no need to go further at this point in time.

Such an approach commends itself to those who favour judicial minimalism, that is to say, people who believe in solving a current problem without trying to decide how all such future problems should be handled.

For others, where the dignity of the individual is affected, minimalism is not enough. Only a clear expression of the importance of respecting these rights can suffice. Perhaps more will be done in future cases.

Jeffrey H. Foreman is a first-year student at the Norman Manley Law School. Email feedback to columns@gleanerjm.com and foreman.jeffrey@gmail.com.