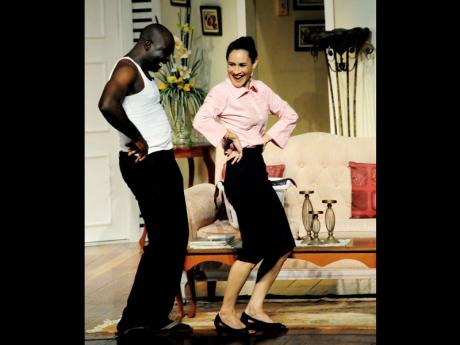 Josephine Benedict, played by Maylynn Walton, dances with Rapper (Christopher McFarlane), a vagrant she picked up on the street, during a scene from Basil Dawkins' play 'Toy Boy' at The Little Theatre on Sunday. - Winston Sill/Freelance Photographer

Through the story of two characters, the play addresses social hypocrisy and 'mad man philosophy'.

But before all that was revealed, the almost full house at the Little Theatre on Tom Redcam Road was treated to the singing of the national anthem and an energetic performance by Ossie D and Stevie G.

The energy from the two vocalists seemed to make its way into the performances as Josephine Benedict (Maylynn Walton) burst on to the stage as soon as the curtains were opened, disclosing a tastily decorated set. The set was to represent a house in an upscale neighbourhood.

Josephine was excited about the prospect of a reunion with Richard, who she had not seen for more than two decades. However, as had happened before, her past keeps them from getting together.

A lonely and desperate Josephine decides to befriend Rapper (Christopher McFarlane), a vagrant she met in a chance encounter. Shortly after their encounter, she decides to take him into her home, but their 'relationship' is threatened by her off-stage best friend, Shelia. Eventually, in a twist, good advice from Rapper helps Josephine come to grips with her problems.

In her debut as director, Toni-Kay Dawkins, offspring of the playwright, did a marvellous job.

Her directorial decisions were as sound as the set.

The language of Toy Boy, while philosophical, is also humorous. And both Walton and McFarlane seemed to have fully understood that timing was important to the delivery of the lines. The complexity of their characters was not lost on them either. Josephine, the hypocrite, the loner, the business woman, and the lover were all clearly defined and presented by Walton. She did have the odd tendency to come off as a little unnatural, her speeches coming across as if she was reading her lines.

Not so for McFarlane, though. He was solid throughout. Through some brilliant acting, McFarlane highlighted the complexities of Rapper, the former prisoner, the vagrant, the mad man, and the artiste.

The set was amazing! It depicted the wealth and status of Josephine. From the furniture to the décor, all was nicely chosen and creatively placed on the stage. The costumes were also well thought out and reflected the situations in which the characters wore them.

Toy Boy is worth being seen. It is guaranteed to make you laugh, while reflecting on the circumstances that transform the lives of Josephine and Rapper.