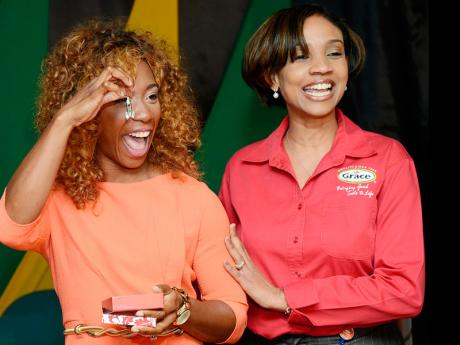 Shelly-Ann Fraser-Pryce (left) shows off part of the rocket-shaped earring and pendant set that she was handed as a gift by Tania Christie, marketing manager, GraceKennedy Financial Services, at the Hooray For Shelly-Ann homecoming celebration at GraceKennedy's head office on Harbour Street, yesterday. - Rudolph Brown/Photographer

Less divisiveness in the local track and field fraternity, greater social, financial and anti-doping educational support for athletes and a greater platform are just some of the objectives that superstar Jamaican sprinter Shelly-Ann Fraser-Pryce is hoping to achieve from an intended union for Jamaican athletes.

Spearheading the efforts, Fraser-Pryce, a seven-time gold medallist at the Olympic and World Championships level, told The Gleaner that she is currently in consultations with a view to getting the union started in what she termed the "very, very near future".

However, it's something she knows will need the support of corporate Jamaica as well as the Jamaica Athletics Administrative Association.

"It's something that (MVP Track Club president) Bruce James and I have talked about and it's something that we are looking to get done. Having an athletes' union will have an impact for Jamaican athletes because we need someone to stand up for us, someone who understands that what we do is hard work, and we need the support from our local federation as well as corporate Jamaica," Fraser-Pryce said.

"Direct objectives include making sure that funds are allotted when it comes to our young athletes, and we do have many who are not earning a lot of money and they need that support. Too often we find that a lot of persons start getting support after they have reaped the rewards," she added.

"Some of them (athletes) are working part-time and training, some are in need of so many things, also education as it comes to doping violation and supplement taking. There are so many things we can do. We need somewhere to go where our athletes can get to know what they are taking and ways in which they can be supported. A lot of our younger athletes are not able to financially secure lawyers for their cases and we definitely have a lot of areas where we believe our athletes can benefit from a union," said Fraser-Pryce, before turning her attention to what she described as division.

"We need someone to represent us and we also need the support of our local federation in taking a stand and not allowing us, sometimes, to feel intimidated about what others have to say about us sometimes I feel that is lacking.

"There is too much division I believe in the different camps, so I definitely believe that a lot of our key players will have to come together and start thinking about the bigger picture," added the two-time Olympic 100m champion.

The matter of athletes unionising took legs during the 2012 Olympics, when athletes were barred from promoting private sponsors, gaining collective bargaining or demanding prize money during the Olympics through the controversial Rule 40.

Jamaica-born American star Sanya Richards-Ross has been extremely vocal about the need for unions to tackle such issues.