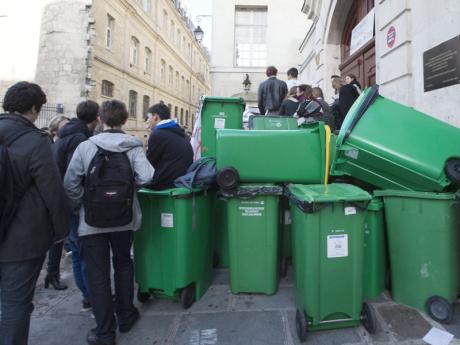 Students gather at barricades made of garbage bins to protest against immigration policy, in Paris, yesterday. - AP

Several hundred French teenagers erected barricades outside their schools and marched through Paris yesterday to protest the police expulsions of immigrant families, including some of their classmates.

Police sprayed tear gas at a few students throwing projectiles, but most marched peacefully, some climbing on bus shelters to shout demands for the interior minister's resignation.

Anger erupted this week over the treatment of a 15-year-old Kosovar girl who was detained in front of classmates on a field trip. The government says her eight-member family had been denied asylum and was no longer allowed to stay in France.

Such expulsions occur regularly around France as the government tries to limit illegal immigration. But the treatment of the girl touched a nerve, with critics saying police went too far, and betrayed France's image as a champion of human rights.

The students, saying the expulsions are unfair to children, hope to pressure France's Socialist-led government to allow the girl and a recently expelled Armenian boy to return to France.

At one high school in Paris, students piled green garbage cans in front of the entrance and hung a banner saying 'Education in Danger'.