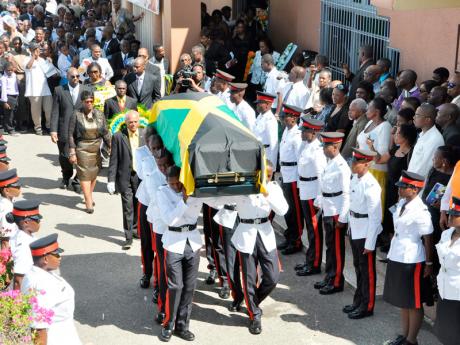 Pall-bearers from the Jamaica Constabulary Force carry the coffin containing the body of former Portmore Mayor George Lee past a final guard of honour during his official funeral at the Power of Faith Ministries in Portmore, St Catherine, yesterday. - Jermaine Barnaby/Photographer

As Simón Bolívar is to South America, George Lee is to Portmore, St Catherine - a founding father.

The first directly elected mayor in the English-speaking Caribbean, 'Mr Portmore' got the send-off you would expect for a man described as a visionary, motivator, leader, and true man of the people.

A wide cross-section of persons - from members of parliament to curious passers-by hoping for a glimpse - turned up at the Power of Faith Ministries in Portmore yesterday to bid farewell.

There were tears, but there were copious amounts of laughter, too. Karen Hewitt-Kennedy, principal of the Portmore Community College, was the main culprit. During her remembrance, she joked that the flying insects for which Portmore is known had left a message.

"'Di 'Mosquito Man' gone. Portmore now belongs to us'," she said. Of course, she was alluding to Lee's tenacity in seeking to keep the municipality free of the pest. She good-naturedly ribbed former Mayor Keith Hinds as she recalled it was under his watch George Lee Boulevard was christened.

"Why would a political opponent allow that? It is because it reflected a reality and an irony," she said.

Hinds could be seen nodding in agreement.