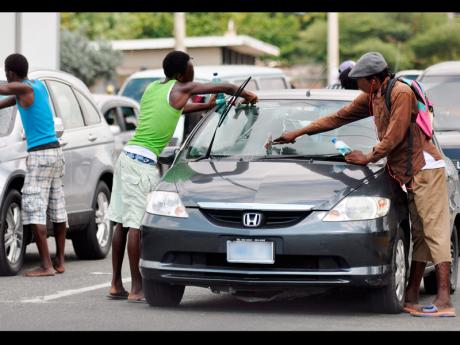 Three men clean the windshields of cars in Three Miles, St Andrew, yesterday. Motorists complain that these men and others in the area often hurl foul language at them when asked not to wipe the windshields. - Jermaine Barnaby/Photographer 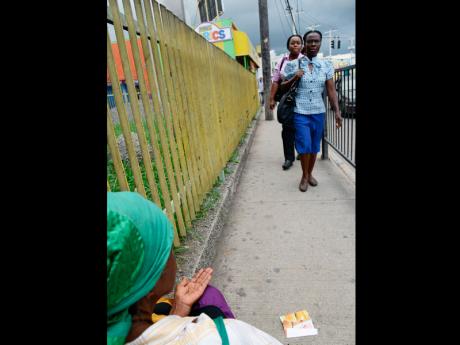 This woman (foreground) was caught on camera begging on the sidewalk adjacent to the Pavilion Mall on Constant Spring Road in Half-Way Tree, St Andrew. Ricardo Makyn/Staff Photographer
1
2

Police Commissioner Owen Ellington is pushing for legislation to curb the actions of "aggressive beggars" and windshield wipers who demand money by acts of intimidation.

In a wide-ranging presentation to a special select committee of Parliament yesterday, Ellington said the Jamaica Constabulary Force had exhausted various pieces of law to tackle what he described as street crimes and disorder, but to no avail.

The commissioner told members of the Internal and External Affairs Committee that the police needed legislative backing to deal with "aggressive begging, aggressive vending, loitering", and other acts of intimidation.

In particular, the police chief said he wanted legislation akin to the Vagrancy Act, which was repealed nearly 20 years ago.

According to Ellington, with the repeal of the Vagrancy Act, there was a broad range of street crimes that were being committed daily that the police had no power to tackle.

He cited, as an example, young men at traffic lights who clean windshields and demand money for their efforts.

"They are a menace to drivers. They are aggressive, and some of them are violent. They spit at individuals in their cars, they spit on your windows, and nothing can be done about it," Ellington said.

"We have tried every legislation … to find something to charge them for, and every time we arrest them and take them to court, they are released because what they are doing is not a crime," the commissioner added.

Ellington also pointed out that legislation was urgently needed to deal with a new phenomenon where youngsters on the corners in some communities use intimidation to extort residents.

He said the young men make their demands of residents on weekends when they believe that individuals get paid.

"They demand that they be paid because they are the ones protecting the community in the absence of residents," the commissioner revealed.

Ellington said these crimes were not reported because the perpetrators had sown seeds of fear in the minds of residents.

"We will not get reports, but if we are able to disrupt those kinds of intimidatory tactics at the community level, we will be able to curb that kind of extortion activity."