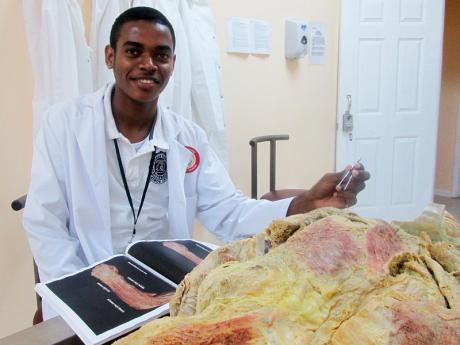 He was the highest-performing student in his class for CAPE Unit Two A Level exams; he won a distinguished award for his school debate team; and he has volunteered hours at local hospitals because he "wanted to give back".

This 20-year-old aspiring paediatrician was always fascinated with the inner workings of the human body, and a career in medicine was the only way to get there. So while at the University of the West Indies, Terrence scouted for medical schools. That was how he happened upon St Helen University's (SHU) Facebook page.

"I did a bit of digging and I learned that that the faculty was extremely experienced and educated, and I especially liked that SHU provided opportunities that some other medical schools did not: like clinical rotations in the United States and preparing for the United States Medical Licensing Examination," he said.

Additionally, he appreciated the feedback from the University, he said, as he would receive immediate responses to all of his questions, while SHU's fortnightly webinar sessions provided the opportunity to meet and interact with faculty.

During his first campus visit, Terrence was won over by the smaller class sizes and the school's use of technology, particularly within the laboratories.

"At SHU, it is completely different. The labs are amazing," he said. "I had never seen plastinated anatomy specimens. The other medical schools I've visited, the bodies are nothing like these. These bodies are spectacular. You actually get to see the arteries, the veins, everything!"

Terrence said he chose SHU because its curriculum was aligned with his goals.

"The way the school curriculum is structured, it is not just academic. We study topics like social determinants, and the art and science of medicine, and these give you a different view of medicine apart from the clinical approach. You learn how to better interact with patients, and you learn how to be a team player and become more mature in your reasoning."

In the future, Terrence envisions himself as a very successful doctor, but in the meantime, he is revelling in the international experience at SHU.

"SHU is truly international, and I'm enjoying getting to know people from different parts of the world," he said. "The experience has made me rich."