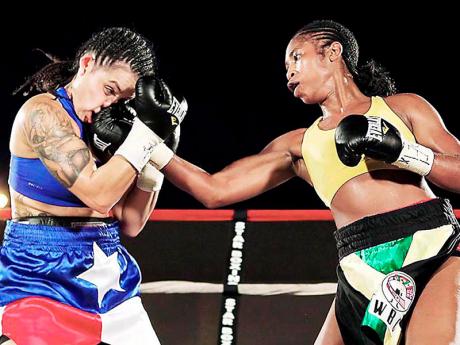 This will be her third defence of the title she won in July 2011.

Ashley told The Gleaner, yesterday, that her training had gone very well and that she was very confident that she would successfully defend her title.

"It will be a good fight because we both want to win," she said.

Speaking directly about her opponent, she said "Zenny is hungry and wants my title and I am determined that I will be taking the title back to Brooklyn with me.

"It will, therefore, be a clash of wills and I am confident that I will be able to take care of business."

The Jamaican-born boxer, who lives in New York, stated further that she was very happy that the fight was taking place, as she has had a difficult time finding suitable opponents. Her last fight was against Chanttall Martinez in Panama on April 20 this year, after being unable to get a fight for over a year. She noted that she was not feeling any pressure and feeling relieved that the fight is taking place now.

There were many false starts before the fight was arranged, she pointed out, and she was, therefore, very happy that her management team had been able to arrange it.

" I like to fight regularly and there is a great deal of satisfaction when I climb into the ring for a fight. That is the reason I am so happy right now," she confessed.

Ashley goes into the ring with a 19-9-1 record, while her opponent Sotomayer has a 10-5-1 record. Her last fight was on May 13 when she made an unsuccessful bid to dethrone the International Boxing Federation super bantamweight title-holder, Kitty Wilson Castillo.

It will be battle of contrasting styles, as the champion is a boxer and her opponent likes to exchange punches at close range. It should be a good fight and the champion is starting as the favourite to retain her title.