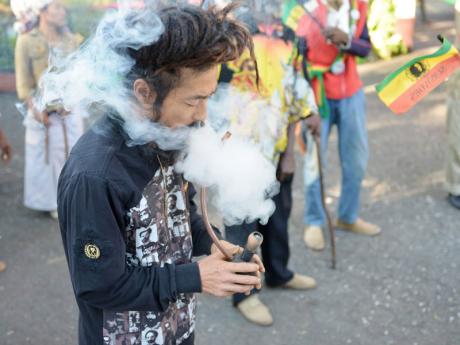 In this February 6, 2013 photo, a dreadlocked man smokes a pipe of marijuana outside a museum dedicated to the memory of late reggae icon Bob Marley in Kingston, Jamaica. While marijuana is still illegal in Jamaica, where it is known popularly as ganja, increasingly vocal advocates say that Jamaica could give its struggling economy a boost by taking advantage of the fact the island is nearly as famous for its marijuana as it is for beaches, reggae music and world-record breaking sprinters. -AP

After decades of failed United States-backed prohibitionist drug policies, several Latin American countries and their elected officials are now singing a new song - 'enough is enough, legalisation is needed for stabilisation'. Uruguay for example, made a major inroad into reforming its drug policy regarding marijuana. In late July (2013), its house of representatives narrowly approved a law that legalised the production, sale and consumption of weed. These leaders argue that it is time to debate a raft of new policy options, which, if implemented, will lead to subsequent legislation. Such legislation, they contend, can sharpen law enforcement's resolve of corruption and crime reduction, the containment of violent gangs and the derailment of transnational organised criminal syndicates. To achieve these outcomes, leaders in the region are calling for the decriminalisation of currently illegal marijuana markets as a drug-policy option. Jamaica's current volatile security environment and its economic malaise are reasons enough for parliamentarians to seriously consider joining their Latin American counterparts, not only in rhetoric, but also through public policy.

The nation's judicial and law-enforcement departments stand to benefit from a reform of the Jamaican government's stance on marijuana cultivation, sale and possession. The penal system, which is in dire need of restructuring and relief, can be improved from marijuana decriminalisation. Our prison conditions and local magistrate courts are bursting at their seams from inmate overcrowding and case overloads for marijuana possession that amount to miniscule consumption levels. The state of California in the United States (US) for example, has seen a 20 per cent drop in youth crime between 2010 and 2011. The study titled 'California Youth Crime Plunges to All-Time Low' was conducted and released by the San Francisco-based Center on Juvenile and Criminal Justice. The study associated the decriminalisation of marijuana with the drop in juvenile delinquencies and crime. Law-enforcement experts and those who work with juvenile delinquents point out that placing youth in the criminal system tends to promote further criminality rather than dissuade it. The Jamaican National Commission of Ganja report (August 2001), concluded that, "The criminalisation of thousands of people for simple possession for consumption does more harm to the society than could be done by the use of ganja itself." Indeed, during my doctoral research (2011) in garrison communities in the western and eastern sections of Kingston, residents commented on the absence of men and fathers in their communities. Among the reasons given for the noticeable absence of males in the home and yards of these communities, were homicides related to gang violence and incarceration for criminal offenses including possession of marijuana. The social and psychological impact of absentee males on these fragile communities is a devastating one.

Decriminalisation of marijuana in Jamaica has the potential of stabilising communities inundated by gangs and plagued by a subculture of gun violence. The International Narcotics Control Strategy Report has suggested that Jamaica remains the largest supplier

of marijuana to the United States (2011; p.325). Police reports indicate that criminal gangs use the proceeds of drug trafficking (cocaine and marijuana) to purchase weapons, vehicles, homes and pay rank and file members of their organisations. In a previous article in this newspaper, I wrote about three categories of Jamaican dons: street, area and mega. Dons of the area and mega types rely heavily on the sale and transshipment of narcotics (cocaine and marijuana) to solidify their power bases within garrison communities. Legislation that tackles the purse-strings of these dons and their gangs will go a far way in returning the authority and legitimacy of Jamaican law enforcement. It will also help to transform these neighbourhoods into free spaces where residents are not encumbered by the violent power of dons and gang members in their communities. The Jamaican state has already started this process of crippling the economic basis of organised crime through the Proceeds of Crime Act and the Proceeds of Crime Money Laundering Prevention Regulations.

There is a guns-for-drugs trade between Jamaica and the Republic of Haiti. The Jamaica Constabulary Force via its transnational crime unit and the Coast Guard, have confirmed that Jamaicans (usually fishermen) take bales of marijuana to the shores of Haiti, where they receive payment in the form of revolvers and hand guns. On a research visit to a restaurant in a fishing village, a local fisherman described how guns and drugs are trafficked through the borders of Jamaica via the Caribbean Sea. The angler explained that at night, fishermen take loads of compressed marijuana to the Pedro Quays and from there, they make their way using fishing boats to Haiti. When I asked him about the risks involved in trafficking guns and marijuana, he responded that the greatest risks come from other anglers, whom he called "pirates." One risks having their: "Boat load of food, weed or guns robbed by these vicious pirates." He also told me that sailors from the Jamaican Coast Guard sometimes receive cash to allow the free passage of guns and drugs. These weapons are in turn sold to local buyers, who often are the 'shottas' from Kingston, St Andrew and other metropolitan areas across Jamaica.

Decriminalising marijuana and brining it within the licit economy can help to destabilise Jamaica's criminal gangs and help to dissolve the economic power that area and mega don types possess. I quote here at length, an excerpt from the National Commission of Ganja; its conclusions in 2001 are very instructive today in 2013:

"That a sustained all-media, all-schools education programme aimed at demand reduction accompany the process of decriminalisation, and that its target should be, in the main, young people; that the security forces intensify their interdiction of large cultivation of ganja and trafficking of all illegal drugs, in particular crack/cocaine; that, in order that Jamaica be not left behind, a Cannabis Research Agency be set up, in collaboration with other countries, to coordinate research into all aspects of cannabis, including its epidemiological and psych-ological effects, and importantly, as well its pharmacological and economic potential, such as is being done by many other countries, not least including some of the most vigorous in its suppression."

The nation's judicial and law-enforcement departments stand to benefit from a reform of the Jamaican government's stance on marijuana cultivation, sale and possession.