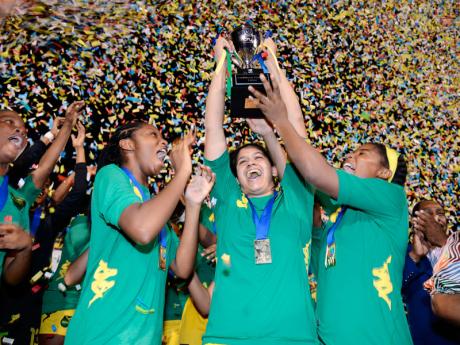 Members of Jamaica's team with the Caribbean Football Union under-20 Trophy after defeating Trinidad and Tobago 1-0 at the Anthony Spaulding Sports Complex yesterday. - Ricardo Makyn/Staff Photographer

Jamaica was last night crowned Caribbean Football Union under-20 champions after emerging from a bruising contest with Trinidad and Tobago 1-0 winners in the final at the Anthony Spauldings Sports Complex.

Khadija Shaw, who was named the tournament's Most Valuable Player, scored the game's lone goal in the 13th minute.

In the opening game of the double header to determine the third-place team Dominican Republic defeated Cuba 2-1. Yaqueisi Soriano (4th and 48th) netted both of Dominican Republic's goals with Yoanna Gonzanez (44th) scoring for Cuba.

Both finalists in Jamaica and Trinidad and Tobago have advanced to the 2014 CONCACAF Under-20 Women's Championship to be staged in the Cayman Islands. The eight-team tournament will see the top-three teams qualify for the Under-20 Women's World Cup.

As is the norm with any contest involving Jamaica and the twin island republic, it was a keen battle from the opening whistle, as neither teams held back on their challenges.

It took one moment of brilliance to decide the encounter and this was provided by 16-year-old Shaw in the 13th minute. She received a ball on the right side of the Trinidad and Tobago 18-yard box and rifled a shot pass their keeper, Tenesha Palmer.

"It was a tough game as we anticipated, so credit to the girls," Jamaica's coach, Xavier Gilbert said. "We should be stronger for the tournament in January; there were a few persons out with injuries today."

Trinidad and Tobago were competitive in midfield, but never got off a clear shot on Jamaica's goal. The closest they came to an equaliser was in the 53rd minute when Patrice Campbell was found unmarked in Jamaica's area, but totally mis-hit her effort from six yards out allowing Jamaica's custodian Taylor Grant to effect an easy save.

Despite the result, Trinidad and Tobago's coach Izler Brown was pleased with her team's performance.

"It is unfortunate that we lost 1-0, but I don't think there was any vast difference between the two teams," Brown said. "Our goal was to come here to qualify for CONCACAF and we have done that."