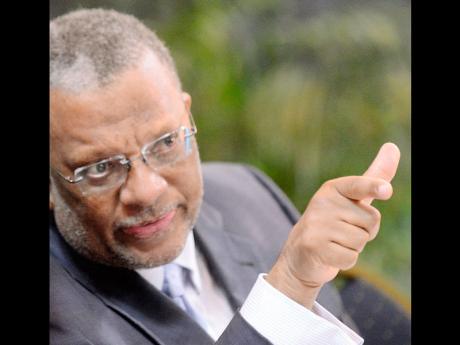 Finance Minister Dr Peter Phillips will today unveil to Parliament his corporate tax and business incentive plan, including the elimination of tariffs on most inputs used by industry, as well as allowing firms to set off against their income tax a chunk of their employee-related statutory deductions.

Phillips will also reveal a heavy front-loading of tax allowances on capital equipment, as part of a general acceleration of write-downs. For instance, firms will be able to claim their allowances on an industrial building over 25 years than the current 40 years, including 20 per cent of their allowance in the first year.

At the same time, the finance minister will tell legislators that his Dennis Morrison-chaired working group on tax reform is already considering issues relating to personal and consumption taxes, which will be ready during the next fiscal year.

"This first tranche of the tax reform programme is primarily about stimulating investment, job creation, and economic growth," said a source, who has knowledge of government's thinking and timelines on tax reform.

"This is the immediate and critical bit," the source said.

The administration is being forced to reform its corporate tax and incentive system as part of its economic support agreement with the International Monetary Fund (IMF), which balked at the discretion finance ministers previously enjoyed in granting tax waivers, and the distorting effect of a plethora of incentives.

Under the new regime, incentives will be codified, and their application non-discriminatory, without reference to ministerial authority.

Under the new arrangements, the income tax rate for regulated companies - such as utilities and those in the financial sector - remain at 33.33 per cent. Others will continue to pay 25 per cent.

However, unregulated companies will be able to claim their payroll taxes - the Education Tax and contributions of the National Housing Trust (NHT), the Human Employment Resources Trust (HEART), and the National Insurance Scheme (NIS) - as tax credits.

But there is one proviso: the claw-back must not be more than 30 per cent of a company's trading profit; that is minus income from non-trading activities, such as investments.

Employers pay an education tax of 3.5 per cent of payroll after other statutory deductions; NHT and HEART are at three per cent of gross wages; and NIS is capped around J$37,500 annually per employee.

The Gleaner source says that the tax on dividend, raised this year to 15 per cent, will be reduced to 10 per cent, and applicable to all shareholders, whether resident in Jamaica or not. Alternatively, the dividend tax will be the difference between the 10 per cent and any relief individuals might have, including viable double taxation agreements.

With regard to tariffs, except for certain prescribed goods - such as motor vehicles, alcohol, tobacco, firearms or where they are higher to protect specific domestic products - and if they are in conflict with Caricom's common external tariff, the Government proposes to cap duties at 20 per cent.

However, duties on capital goods as well as consumers' goods that are used "on a prescribed" manner for industry and specific enterprises will be zero.

"The Government will establish a non-discretionary statutory framework for what is called product input relief," said the Gleaner source.

"No minister will intervene to grant these reliefs," the source added. "They will be part of a statutory framework."