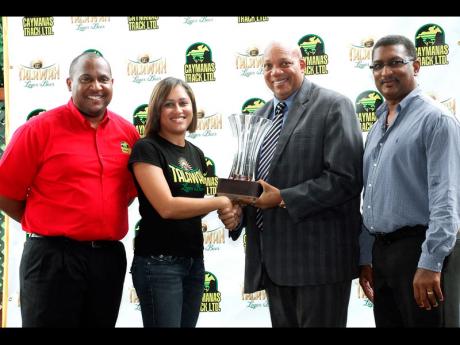 The Superstakes has found its way back to Red Stripe, the original sponsors from its inception in 1978.

The race, to be run over 2000 metres on Saturday, November 9, at Caymanas Park, will now be known as the Tallawah Beer Superstakes for native and imported three-year-olds and up, with a purse of $4.5 million, inclusive of $1 million from Tallawah.

"We're happy to be associated with the race once again as over the years this has been one of the most prestigious races on the calendar and attracts the best horses in Jamaica," said Erin Mitchell, brand manager, Red Stripe and Tallawah.

"The history of the race has been graced by outstanding winners such as Legal Light, who won the inaugural running in 1978, The Viceroy, Mark My Word, Miracle Man and Menudo who won it four years in a row," she added. "We expect the tradition to continue."

Red Stripe, through its Tallawah brand, will sponsor four major races on the programme.

Cedric Stewart, chief executive officer of CTL, recalled that the Superstakes was the brainchild of the late Jack Ashenheim in collaboration with his friend Paul Geddes, chairman of Desnoes & Geddes Limited, and became a reality in 1978 when the legendary LEGAL LIGHT, owned by Ashenheim, won the inaugural running with Winston 'Fanna' Griffiths aboard.

"The Superstakes has come full circle, from a modest purse money of $32,000 in 1978. The trailblazing sponsors from 214 Spanish Town Road are once again ready to stake their claim to this multi-million dollar blue riband event that has written and rewritten the history of horseracing in Jamaica," he noted.

"We especially welcome home and thank the team from Red Stripe to Caymanas Park and thank other generous sponsors who have over the years carried aloft the burning torch of the Superstakes. But the time has come for the heirs of the early pioneers to reclaim their heritage," he added.