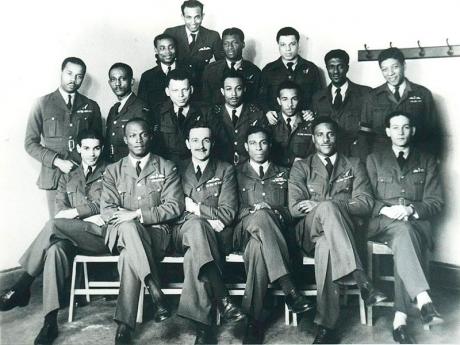 A group of RAF officers. Ulric Cross, the most decorated West Indian veteran, is third from right in the front row.

LIKE THE sailors at the Battle of Trafalgar or the archers at Agincourt, the figure of the World War II Royal Air Force (RAF) pilot stands high in Britain's national story.

When we imagine the typical Spitfire pilot or the crewman of a Lancaster bomber, we seldom picture someone of African heritage. Yet nearly 500 black men from the West Indies, Africa, and Britain answered the call to serve as aircrew, and thousands more worked as ground-support staff. Before the war, entry into the Royal Air Force was restricted to "men of pure European descent" except under exceptional circumstances. An exceptional circumstance arose in the early years of the war when thousands of airmen were lost or killed in action. As a result, the call for volunteers went out across the British Empire. This call (together with the withdrawal of the colour bar to service) led to the enlistment of nearly 6,000 people from the Caribbean. Sixty black Africans volunteered, with a further 5,200 serving in the West African Air Corps.

if the nazis won

Flight Lieutenant John J. Blair, DFC (Jamaica) said: "While we were fighting, we never thought about defending the Empire. Few people think about what would have happened to them in Jamaica if Germany had defeated Britain, but we certainly could have returned to slavery."

The experience of volunteers of African heritage in the RAF is the subject of a new exhibition at the Royal Air Force Museum, curated in partnership with the Black Cultural Archives. Unlike the famous Tuskegee Airmen of the United States 332nd Fighter Group, black aircrew in the RAF were not segregated and served alongside white servicemen. A total of 103 were decorated. Former Royal Air Force personnel featured prominently among those who led the Caribbean territories to independence, including Errol Barrow, prime minister of Barbados, and Michael Manley, prime minister of Jamaica. Up to a third of the arrivals on the Empire Windrush in 1948 were either former airmen or those looking to join the service. In the post-war period, ex-Royal Air Force personnel would play crucial roles in the development of the black community in Britain.

The Black Cultural Archives will be opening the United Kingdom's first dedicated Black Heritage Centre at Windrush Square, Brixton, in 2014.