Seattle - There's so much to do! 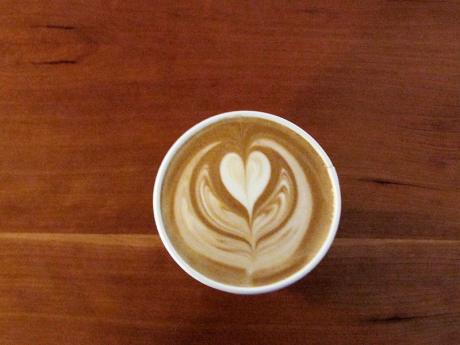 Creative design in the coffee at Fuel. 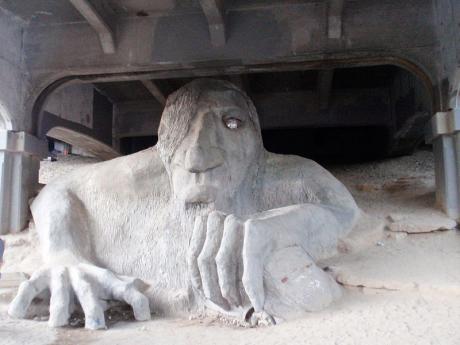 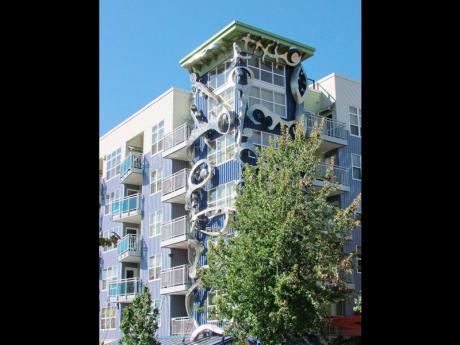 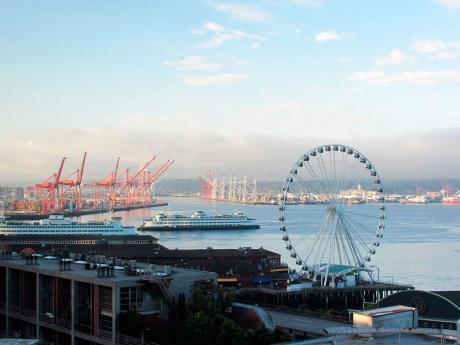 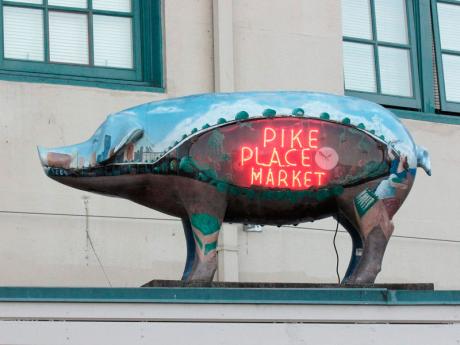 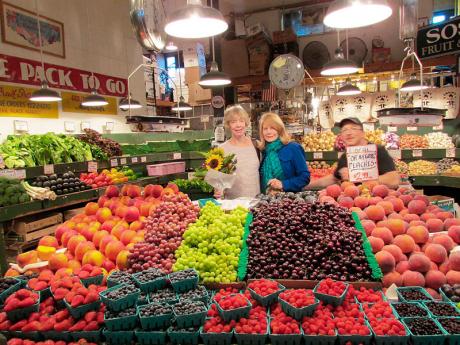 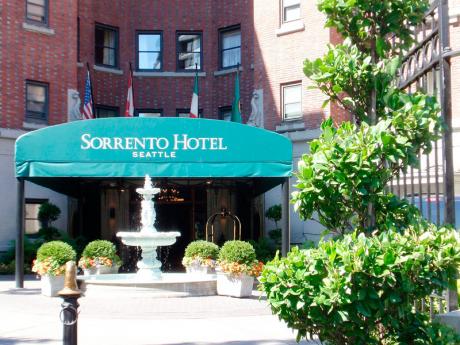 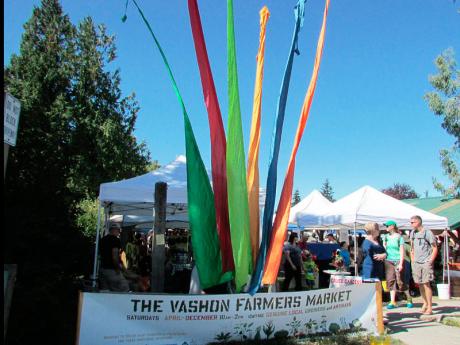 Seattle, America's Pacific North-west city off Puget Sound - with its iconic Space Needle and Lunar Orbiter dessert at SkyCity restaurant in the Seattle Center, where there's also a Children's Museum, Global Village, and Monorail, all built for the 1962 World's Fair - is a dream city for families to visit.

There's Woodland Park Zoo, the Seattle Aquarium, the EMP Museum for rock music or science fiction, and don't forget the Museum of Flight, all of which are available on the Seattle CityPass at discounted prices.

I started my visit with a cup of coffee, not at Starbucks founded in Seattle in 1971, but at my host's Montlake neighbourhood branch of Fuel Coffee where Matt Ehresman created a perfect heart-shaped cup of latte before Pat and I strolled through

Seattle's famous Farmers' Market awaited us next, and it didn't cost a penny to enter. Arriving at Pike Place Market at 6:45 a.m., we watched deliveries of flowers, seafood, agricultural produce and crafts to hundreds of stalls stretching for blocks above Seattle's Waterfront. Lowell's "almost classy" Restaurant opened at 7 a.m. where for breakfast, we feasted on smoked king salmon, scrambled eggs, green onions, capers with bagels and cream cheese on the top floor, right at the window overlooking Elliott Bay. The Great Wheel by Pier 57 wasn't yet open for rides, but with our view, we watched a ship docking while a ferry left for West Seattle or one of the islands.

You see, Seattle is created from an amalgam of fascinating neighbourhoods nestled among lakes, bays and a canal. From the Washington State Ferries Terminal, we drove onto a ferry to Vashon Island. Exhilarating describes the short ride across the Bay's blue water and glacier-peaked mountains in the distance. It was Saturday, so with a short drive to the small town, we found a friendly community farmers' market beneath tents with produce, home-baked cakes and crafts on sale.

A ferry ride back and we headed north-west to the funky Fremont neighbourhood which prides itself on its artistic architecture and offbeat outdoor art, including a seven-ton statue of Lenin, satiric "People Waiting for the Urban," and my favourite, the 15-foot 'Fremont Troll' eating a Volkswagon, under Aurora bridge. We dined overlooking Lake Washington Ship Canal at Ponti Seafood Grill, 3014 3rd Avenue North, eating crab cakes and delicious seafood spring rolls, on a tree-shaded balcony close to the Fremont Bridge, so low it regularly opens. Along Burke-Gilman Trail, cyclists pass by regularly and water sports are equally popular, so kayaks, canoes and rowing shells completed the scene.

Seattle is so different from either New York
or Miami that knowing some history would help. First settled by Native
Americans arriving from Siberia more than 11,000 years ago, Seattle's
name honours Duwamish Chief Si'alh or Sealth. He accommodated white
settlers, Arthur and David Denny, after their 1851 arrival on the west
coast and died in 1866, never seeing Seattle's expansion, as first one
transcontinental railroad came to nearby Tacoma in 1873, and then
another brought trains right into Seattle in 1893. Logging, lumber mills
and fishing came first, then prospectors used the port, rushing to the
Klondike Gold Rush of 1897. All of this and Boeing airplane factories
contributed to Seattle's prosperity long before Microsoft headquartered
in Redmond, north of Bellevue.

Today, metropolitan
Seattle-Tacoma-Bellevue has a population of 3.5 million while Seattle
itself is just over 600,000.

Known as a 'green' city,
Seattle's respect for environmental concerns may be a lingering
influence of its Native American heritage. Pioneer Square in Downtown,
where the Dennys began their commercial pursuits, is a cobblestoned
historic preserve of Victorian architecture built after the great fire
of 1889. A statue of Chief Sealth and a Tlingit totem pole vie with the
Klondike Gold Rush National Historical Park Museum, Smith Tower's
Observation deck, and a cluster of neighbourhood galleries and shops. An
oasis of calm is nearby Waterfall Garden Park. In case of rain, take
Bill Speidel's Underground Tour of Seattle's subterranean history
starting in a restored Pioneer Square saloon.

It never
gets deadly cold in Seattle, but showers are frequent so Bella Umbrella
is a welcome shop with more than 800 vintage umbrellas from around the
world which you can either buy or rent just eight blocks north-west, at
the corner of Pine and 1st Avenue. Within walking distance leaving
Pioneer Square, heading over to popular Pike Place Market, you'll want
to visit the Seattle Art Museum at 1300 1st Avenue en route, or
southeast of Pioneer Square is International District (ID) which
celebrates Asian Pacific Americans from China, Cambodia, Korea, Japan
and Vietnam. There's even a Little Saigon of the '60s. Dine at great
Asian restaurants and visit Wing Luke Museum at 719 South King Street,
or plan to be in the ID for fireworks and the lion dance during Chinese
New Year.

On
our second day, we headed for First Hill neighbourhood, to Frye Art
Museum for 'The Hudson Flows West', an exhibition of landscapes "from
the Hudson River Valley to the earliest images of the western frontier."
I had never realised that "the quest to document the West was a
nationally-funded interest; prior to the Civil War nearly one-third of
the Federal budget went into military, surveying and patent office
expeditions that eventually employed thousands".

After
this exquisite exhibition, we walked around the corner for a moment in
St James Cathedral, then over to nearby prestigious Sorrento Hotel, 900
Madison, with their gourmet Hunt Club Restaurant. Dee Ireland Lewis, the
entertaining bartender at Hunt Club Bar, shared the secret of his
Bloody Mary and his Jalapeno Martini for a real kicker. Proper afternoon
tea is available by the fireplace with its antique 1911 ceramic mantle.
We didn't have time for local microbreweries, alternative music
nightlife, or even whale watching off San Juan Island. There is just so
much to do in Seattle!