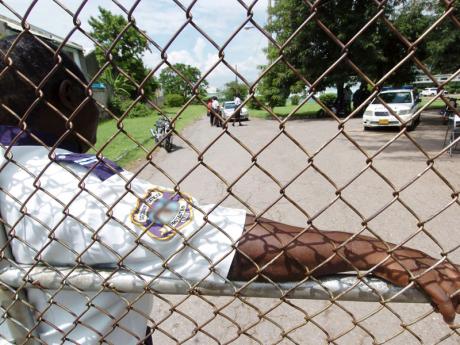 If Michael Manley were alive, he probably would be ill again because of the debacle with security workers in this country. Worse, he would be terribly upset that the National Housing Trust (NHT) has not provided as many housing solutions as he wished, and that there are persons who are dishonestly failing to remit monies owed to it, on the pretext that their employees are not workers.

Manley, unlike his successors, did not simply give platitudes and corny clichés about 'putting people first'; he pushed a raft of worker-protection laws and established the NHT to benefit the working class. With a shortfall of 400,000 housing solutions and the majority of Jamaican workers non-unionised and the contract work issue growing, Manley must be clawing at his headstone.

Last Monday, my colleague Gary Spaulding opened a can of worms, revealing that Government is finally getting it right and putting its foot 12 inches below the middle of the back of the security companies.

Truthfully, it is like suddenly discovering that the rice in the fried rice meal was cooked last night, or that my dreadlocked friend was smoking real weed and not cerassee. Security guards are workers, and I have been telling the Government, trade unions and employers so for the past decade and mash.

However, it is not because the Government has suddenly got a spurt of conscience and decided to ignore its campaign contributions from those who want to see the contract work fiasco continue. Rather, it is because the 'Trust' (for want of a better word to describe the Government action) had billions sucked out by the mother of all raids on its coffers earlier in the year.

Now, looking to scrape all funds owed to it from all sources, as it should, the Government recognises that the millions owed to it via unpaid NHT contributions make any multimillion-dollar campaign injection seem like a mosquito pricking an elephant or chicken feed.

Now, forced into glory, the Government has the Jamaica Society for Industrial Security (JSIS) feeling very insecure about its economic future. The sector employs more than 20,000, and now down to around 200 firms, it peaked at close to 300 firms in 2000. During the 1990s, it grew as fast as a rumour from 150 companies employing a few thousand to more than 16,000 in 2007. Feeding off the hysteria created with the record homicides in the 2000s, it is a milch cow and the workers are the least of the beneficiaries.

Relationship between crime and security companies

The billion-dollar question is; What is the relationship between crime and the security companies? Jump not to a response, because it could be exactly the opposite of what one thinks. Conventional knowledge is that the increase in reported crimes leads to greater demand for security coverage.

Has anyone ever wondered whether or not the relationship between crime and the increase in security companies is the reverse of what we think?

Here is a no-brainer. Poverty and underemployment do not, by themselves, cause crime, but they can act as catalysts, pushing persons at risk over the edge. This is how it might possibly occur. A family loses its ability to take care of its basic requirements of living; the older children get 'shub out'; the oldest male pubescent or young adult child is least protected and is thus most at risk. Therefore, the pool of young men entering post-secondary education shrinks, and the gangsters' paddock burgeons with an army of would-be 'shottas'.

A constant reminder I have told my graduate students and practitioners of human resources management over the years is what I learned not theoretically from my books, but gleaned from years of settling disputes at the labour ministry. After looking into the blood-filled eyes of dismissed and disenfranchised workers, and the lamentations about their hungry children, the warning is that when a worker is terminated, it is a family that is fired.

Observe! The period 1992 to the end of the 2010 was characterised by overall reducing unemployment. However, when the unemployment figures were picked apart with a chicken's beak, something seemed foul. The fact is, although unemployment fell from 28 per cent in 1989 to 11 per cent by the end of 2010, the underemployment rates increased. More people were working less than half the normal 40-hour workweek than in the previous decade. By the end of the period, the majority of persons classified by the official statistics as being poor were persons who had jobs: the employed. Simply put, the 'hallibuttn' worker became more the norm than the exception.

You see, the ugly underbelly of the statistics, with all the marks of a frustrated working class, 'carrying stumuck' for exploitative employers, is a cycle which began on the plantations replicating itself.

With the exception of the officers in the Pay and Conditions of Employment Branch (PCEB) of the Ministry of Labour , and researchers, nobody seemed to notice that complaints by non-unionised workers increased tenfold from 1991 to 2010. In 1991, a mere 792 persons went to the PCEB because they were either unfairly dismissed or their terminal and other benefits under the law were unpaid. By 2002, this number was more than 5,000, and by 2010, it had grown, like a certain politician's belly, to around 8,000.

But, doesn't it strike you odd that complaints by dismissed workers grew between 1992 and 2010, yet the unemployment rate was the lowest in decades? Well, the explanation lies in the new type of work that was created during the period. Masses of workers, originally employed in what the International Labour Organisation (ILO) calls 'decent' work, were 'retrenched', 're-engineered', 'redundant' and other Rs not suitable for print or broadcast. Then they were re-employed under dubious contracts and labelled contractors.

It was a devious and economically unsound strategy being pursued by many countries. First, given the studies and common-sense evidence, that productivity increases and social conflict decreases when workers are employed decently, the ILO commissioned 30 studies globally to investigate 'disguised' or spurious contracts. Two were done in CARICOM; Trinidad in 1999 and ours in 2001.

Against the background of the studies and several conferences under the aegis of the ILO between 1999 and 2001, Government was advised to make workers who are engaged under 'labour-only' contracts to unambiguously be classified as workers. Furthermore, the recommendation was that the proposed 2001 amendment to the Labour Relations and Industrial Disputes Act (passed in 2002) was inadequate and did not offer any real protection to workers engaged under disguised contracts.

Nothing was done, despite the existence of exemplary ILO-influenced legislation, in other CARICOM countries, draft regional statutes on labour relations and termination, and the ILO technical team being resident in the Caribbean. Indeed, the Jamaican Government ignored the two studies and recommendations from 2001 to 2007, even when the ILO used them for its training programmes in Geneva.

In the end, the majority of Jamaican workers were prevented from having access to the means of challenging their dismissals effectively. More unprotected contract workers were blocked from their basic rights at work, such as vacation, and sick and maternity leave.

It is not rocket science: The commissioners after the 1865 Morant Bay War and the 1938 uprisings recognised that what were needed were proper tribunals for the airing of labour matters - for all workers. For the period up to 2010, Government did not see it fit to fix this.

So, let me say it plainly: The high levels of societal violence and the low labour productivity are the result of the poor labour policy and low protection given to marginal workers, and the security industry is the poster child.

Bet you no one is gonna give me a national award for this.