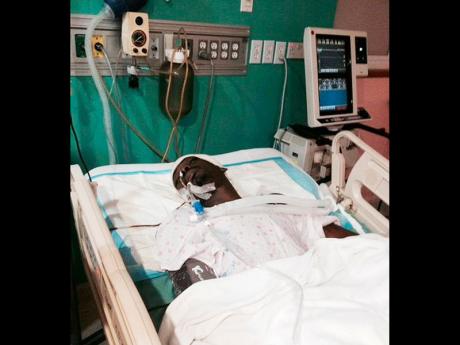 Kamoza Clarke in his hospital bed.

It is a case which evokes memories of Michael Gayle, the mentally ill man who was beaten to death by members of the security forces in 1999.

This time the victim is Kamoza Clarke, a 31-year-old mentally ill man of Bunker's Hill, Trelawny. However, he is hanging on to his life by the thinnest of threads.

Clarke is now lying on a hospital bed in a vegetative state because of what is believed to be "repeated blunt-force trauma to the head".

That would indicate that Clarke was badly beaten, but the police, in whose custody he was at the time of the incident, claim that Clarke "fell and hit his head on a wooden bench".

The police's explanation is not being accepted by the family, and they are calling for a full investigation into the incident that has left a young man, who everyone knew has mental problems, facing almost certain death.

Clarke's sister, Olive Hines, told The Sunday Gleaner that the medical opinion is that the blunt-force trauma caused intra-cerebral haemorrhage, which left him unable to breathe on his own, initially.

Since then, he has had a successful surgery.

"He is breathing on his own. But health professionals at the hospital say he will die, and he will remain in a vegetative state until he dies," Hines said in a voice thick with sadness through the telephone lines.

"A CAT scan showed a blood clot and bleeding on the left side of the brain. Doctors at the Cornwall Regional Hospital spent several hours in surgery to remove the blood from his brain, but the findings are just not good," added Hines.

According to her, Clarke was arrested and charged with malicious destruction of property following a series of incidents involving his child's mother and her relatives.

He was taken to the Falmouth police lock-up, where he was allegedly involved in a fight with a cellmate, and it was there that the beating reportedly took place.

Allegations are that following the fight, Clarke refused to return to the cell and demanded to see a doctor.

He allegedly held on to the bars of a holding cell and continued his demand.

Reports from inside the lock-up are that he was beaten on his hand and head by police personnel, and he released his hold on the bars only after he was pepper-sprayed.

Clarke lost consciousness and was taken to the Falmouth Hospital, where he regained consciousness for a short while, only to become unconscious again.

His condition deteriorated and he was transferred to the Cornwall Regional Hospital after it was determined that he could not breathe on his own.

Superintendent Dermot Lawrence, head of the Trelawny police, told The Sunday Gleaner that while he could not speak to Clarke's mental state, he could confirm that a baton was used to subdue him.

"What I got is that pepper spray was used, and the baton was used to restrain him, and there is report that he fell and hit his head on a bench. Those are the reports that I have received," added Lawrence, as he pointed our news team to the Independent Commission of Investigations (INDECOM), which is probing the case.

According to INDECOM, the matter was reported
to it on October 20, one day after it occurred, and its investigators
have since visited the station and recorded statements from prisoners
and copied diary entries.

INDECOM said notices have
also been served on police personnel to provide statements, while CCTV
footage was requested from the police. The investigative body says it
has also requested the medical certificate from the
hospital.

"After all this is received, a final
investigation report will be submitted to our legal department for them
to look at the file. Following this, charges may or may not be
recommended," added INDECOM.

Clarke's troubles
reportedly started two years ago, when he was diagnosed with psychosis -
a mental state often described as involving a loss of contact with
reality.

He is said to have deteriorated mentally
after he lost his job and after a relationship went
sour.

His sister
said in the latest events, he was involved in a physical altercation
during a domestic dispute. The police were called in and he was
arrested. He was offered bail, but the judge ordered that the court's
office should provide a letter for medical intervention after his mental
history was outlined.

Clarke was rearrested and
charged with malicious destruction of property before the letter was
produced, after he kicked in the door of his in-laws' house and took his
child.

"Kamoza is mentally ill. He was diagnosed
psychotic but had stopped taking the medication, and refused to keep
appointments with the psychiatrist. He was even in hospital and he
checked himself out, and we couldn't force him to keep the
appointments," said Hines.

But despite Clarke's
stubborn refusal to take his medications and follow the advice of his
doctors, Hines cannot accept that her brother is lying in hospital with a
swollen hand and a heavily bandaged head caused by the persons who are
mandated to 'serve and protect'.